We are approaching the 100th anniversary of the Scopes trial in just eight short years, and it'll be here before you know it. For now, there's a surprising amount of things going on lately in Rhea County (site of the Scopes Trial) that I'd like people to take note of.

The Rhea County Historical and Genealogical Society sponsored a special meeting on January 15 to discuss restoration and promotion of the Rhea County Courthouse. I attended the meeting, and you can read all the details at the Rhea Review. Basically, we talked about needed repairs for the courthouse, what we might do with the courthouse if the county builds a new Justice Center, and ways to promote the courthouse. There were some interesting ideas presented, and state representative Ron Travis reported that he had met with the governor and asked for money to replace the roof on the courthouse. So I was delighted to see the latest headline from this weekend's Herald-News: 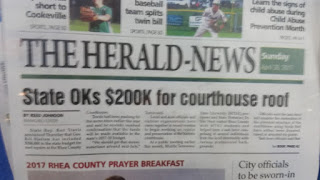 In case you're wondering, that money came from a state government surplus.

I also commented previously on the Clarence Darrow statue coming to the courthouse lawn. Currently on the courthouse lawn there's a statue of William Jennings Bryan that was donated by Bryan College on the occasion of their 75th anniversary. Now a group that includes the American Humanist Association has raised money to pay for a statue of Darrow to go up on the lawn. In my post from last summer, I took the Chattanooga Times Free Press to task for trying to stir up controversy where there was nearly none.  Well, guess who's up to their old tricks again?

With the statue coming this summer, Times Free Press has now published another article describing the opposition to the statue by local resident June Griffin. Not surprisingly, she opposes the statue in rather vehement terms, which the reporter seems quite happy to describe. There's even reaction from the Humanist Association on her outlandish "threat" of military action.

The reality is that the historical society and the county executives have signed off on this statue, and it's going up during the Scopes Festival this summer. I support the statue, and I'm looking forward to the unveiling. On the other hand, June Griffin is well-known locally for her opinions and behavior (you can read about her prayer at the state senate and her arrest). Mrs. Griffin is entitled to her opinions and whatever legal means she has to express them. That's her first amendment right, but when an organization looking to stir up trouble presents her to the world as a representative of my community, that really burns me up. Little has changed in the 92 years since the Scopes Trial. The media still come to Dayton with the story already written. Fake news indeed.