Showing posts from March, 2012
Show all

March 29, 2012
According to the latest issue of Acts & Facts (which I got in the mail yesterday), AIG's astronomer Jason Lisle will be going to the Institute for Creation Research as their new Director of Research. As I write this, I haven't been able to find any confirmation or announcement on ICR's website . I know ICR has been looking for a director of research for a long time, and I think Lisle will be a good fit for them. I'll be quite interested to see what Lisle will do with his new position. Seems like a pretty big deal to be Director of Research at the Institute for Creation Research . So congratulations to him! Feedback? Email me at toddcharleswood [at] gmail [dot] com.
Read more

Who were the Red Deer Cave people? 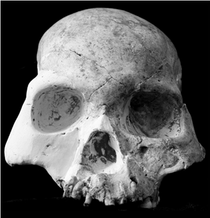 Somehow I missed this when it was published two weeks ago, but it's a very interesting story. Curnoe et al. published a description of some remarkable human-like fossils from China. The remains consist of a partial skull originally excavated in 1979 and other fragmentary remains (including a skullcap) newly-excavated in China by Curnoe and his team. The skull is visually quite peculiar, with widely flaring cheeks and sort of flat faces. Their analysis indicates that the remains possess a weird mixture of traits found in modern Homo sapiens and other traits considered to be archaic (plesiomorphic). Their radiocarbon dating suggest that the remains are around 14,500 to 11,500 years old, which is comparable to the Homo floresiensis remains from Indonesia. Curnoe et al. offer two possibilities to explain these fossils: One possibility is that the Longlin and Maludong remains represent a late surviving archaic population ... Another possible explanation is that the unusual
Read more

March 23, 2012
Remember that you have one week from Sunday to turn in your abstracts for the Origins 2012 conference . We should have ticketing information available very soon (maybe next week). Feedback? Email me at toddcharleswood [at] gmail [dot] com.
Read more

March 19, 2012
Ring species are really quite startling evidences of biological change. A classic ring species is a single species that is distributed around some kind of geographic barrier to dispersion. Around the barrier, the species populations have differentiated into varieties or subspecies. Most of the adjacent subspecies are interfertile, except for one pair that is either reproductively isolated or experiences reduced fitness. For those of you who just tuned out from all the biology jargon, here's a simpler explanation based on what we think ring species are: Imagine a species spreading out (dispersing) from a location, say in northern California. This species (say it's a salamander) is a mountain species and doesn't like the lower elevations. As this salamander spreads southward over many generations, it will avoid California's central valley and spread down the hills and mountains that run around the central valley. Since salamanders don't really move very fast,
Read more

March 16, 2012
For several years now, Southern Adventist University in Collegedale, TN has been turning the halls of the Hickman Science Center into a beautiful new exhibit, with the intention of explaining our origins from a creationist worldview. The last time I saw it, they were working on the geologic column exhibit, having finished an amazing mural depicting the structure of a cell. I got to watch as they uncrated their Dunkleosteus replica (that's a really nifty kind of fish ). Now comes word that the work is finished and the exhibit is open to the public. You can find out more about the exhibit at their website: SAU Faith & Science After the somewhat discouraging reports in the latest NCSE Reports , it's nice to see Southern Adventist still taking a firm stand on creation. Congratulations to Lee Spencer, Keith Snyder, and all our friends and colleagues at Southern! Feedback? Email me at toddcharleswood [at] gmail [dot] com.
Read more

March 13, 2012
Just a quick reminder that the deadline to submit biology and geology abstracts to the annual conference of the Creation Biology Society and Creation Geology Society is less than three weeks away on April 1 .  See the full call for abstracts here: 2012 Call for Abstracts Feedback? Email me at toddcharleswood [at] gmail [dot] com.
Read more 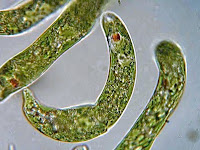 You might remember euglena from your biology days peering at tiny critters under the microscope. Euglena was that weird one-celled organism that could swim around like an animal but photosynthesize like a plant. Turns out there are a number of euglena-like organisms (euglenids) that are also photosynthetic but appear to have evolved from one-celled organisms that are "phagotrophic." Phagotrophic is a fancy word that basically means that the non-photosynthetic euglenids get their energy from eating other stuff. The question is how do you evolve from one to the other? Seems like a big change in lifestyle. Imagine if I suddenly stopped eating, turned green, and started laying out in the sun in my underpants. OK, maybe you don't want to imagine that, but that's the kind of change we're talking about. In a recent paper from BMC Evolutionary Biology , Yamaguchi et al. report the discovery of a euglenid named Rapaza viridis that appears to be able to get energy
Read more

March 07, 2012
Just a quick note to alert readers to two interesting items in this week's Nature . First up is the publication of the gorilla genome. Pieces and drafts of this have been available for years, but this is the first (to my recollection) summary of the entire genome project. Scally et al. (the authors) aligned the human, chimp, gorilla, and orangutan genomes and reported a mean difference of 1.37% between human and chimp, 1.75% between human and gorilla, and 3.4% between human and orangutan. No surprises there, although I am quite certain there are probably denials of these results already being written. Scally et al. also reported that In 30% of the genome, gorilla is closer to human or chimpanzee than the latter are to each other; this is rarer around coding genes, indicating pervasive selection throughout great ape evolution, and has functional consequences in gene expression. For an evolutionary explanation of this result, I recommend Dennis Venema's essay on Speciation
Read more

Set in Stone in Region 1

March 02, 2012
I've had a few questions on how to get an American version of the new film Set in Stone: Evidence for Earth's Catastrophic Past . Paul Garner just announced that the Region 1 (American) DVD is now available. Currently, you can get it from Randolph Productions or from The Berean Call . Currently, Randolph has the better price of $17.95 (Berean Call says: "Retail Price: $19.95, Your Price: $20.00" How can they afford to give such discounts?). I presume that given a few weeks, your favorite creationist organizations will probably add this title to their catalogs, in case you prefer to keep your web ordering to just a few retailers. Feedback? Email me at toddcharleswood [at] gmail [dot] com.
Read more
More posts