Showing posts from May, 2019
Show all

The Denisovan Mandible and Human Diversity 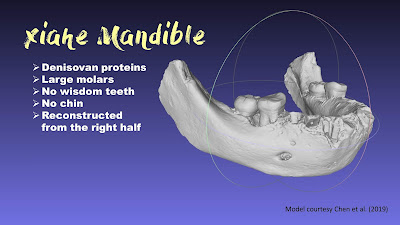 Two weeks ago, the world had the first news of a Denisovan fossil found outside of the Denisova Cave in Siberia.  This might not seem like big news to many, but the Xiahe Mandible (as it is known) is yet another intriguing milestone in the mysterious modern history of a human form known primarily from ancient genomics.  The first hint of the Denisovans came in 2010 with the publication of a mitochondrial genome that was by far the most different form of human mtDNA we have seen to date.  The fossils were limited to a few teeth and a portion of a finger bone.  Even though we could discern a great deal about these people from their genomes, there was literally only a handful of fossils that could tell us what they looked like. This "new" Denisovan fossil, the Xiahe Mandible, is a damaged right portion of a jawbone with two molars that was originally uncovered in a cave on the east end of the Tibetan plateau in 1980.  Only recently did proteomics research reveal that it was
Read more
More posts