Showing posts from July, 2017
Show all 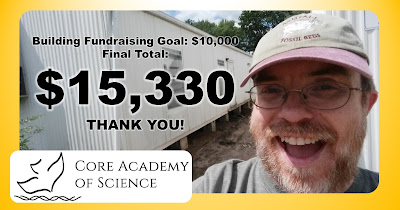 Darrow statue unveiled by atheists poking at him with umbrella Stand in the right spot, and he's looking right at you. Well that's that.  The statue is here.  There was no fuss.  There was no protest.  Two days later, the statue still has its head and no spray paint.  Despite various media outlets trying to manufacture controversy, there was very little.  What a surprise, I say dryly and sarcastically. Longtime readers will recall my ongoing commentary on this story ( here , here , here , and here ).  Most recently a blogger who goes by the name "Friendly Atheist" got riled up interacting with a local opponent of the statue, June Griffin.  She was talking about militias and opposition to the statue, and I suspected it was hyperbole, which so far it appears to be (the militia, not the opposition).  Mrs. Griffin did not attend the unveiling, but she did leave a message for us in front of her store: "FAX" is an advertisement for her business. She is not indicating that Darrow was a communist fax. The unveili
Read more

Time for a lab! 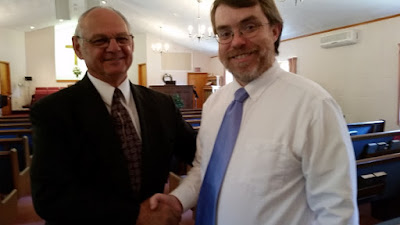 Northwest Baptist Church pastor Hal Jankusky and me. The Lord moves in wonderful ways!  When I first began talking about the Core Academy building, I thought, "I'm pretty sure we can raise another $5,000 for the building.  Ten thousand will be a stretch."  I'm pleased to say that I was wrong. Northwest Baptist Church in Jackson, MI has been a regular supporter of Core Academy for three years now, and I visited their Sunday morning service this past weekend.  I had heard that the congregation had voted unanimously to contribute to our building fund, but I didn't know how much they would donate.  At the beginning of the service, their pastor, Hal Jankusky, called me up to the front of the church and presented me with a check to Core Academy for $7,000!  It was a complete shock.  I started giggling and hyperventilating.  (I'm OK now.) Thank you, Northwest Baptist Church, for supporting our ministry!  And thanks be to God for showing me how mustard seed fa
Read more

A brief history of creationist thought

Here's another of my presentations from the recent Is Genesis History?  conference in Dickson, TN.  In this one, I do a very brief survey of creationist thought down through the ages.  Remember as you watch that I'm barely scratching the surface with this one.  There is much more to be said. Someone ought to write a book... Please remember to pray for our building project!  Learn more at coresci.org/building . Feedback? Email me at toddcharleswood [at] gmail [dot] com. If you enjoyed this article, please consider a contribution to Core Academy of Science. Thank you.
Read more
More posts