Showing posts from July, 2016
Show all 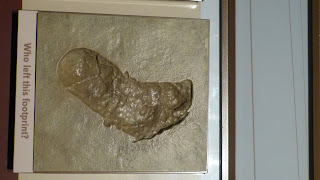 A cast of one of the original Laetoli footprints on display at the NMNH, Washington, DC I just noticed a few interesting stories about an announcement from Tanzania that a second set of australopith tracks has been discovered about 60 meters from the original Laetoli footprint trails.  The Laetoli tracks were discovered in 1978 by a team led by Mary Leakey.  The trackways are about 90 feet long with about 70 prints.  The feet are small and the stride is short, and they are typically attributed to an australopith.  The prints were made in volcanic ash, and have been dated to 3.6 million radiometric years. According to a report on  AllAfrica , The second major discovery is in several trails of footprints, located in one trackway, dated 3.7 million years' old of hominin footprints, about 60 metres from the first discovery of Dr Leakey in 1978. According to this report on Coastweek , Tanzania wants to raise money to build a museum over the site.  There isn't much more info
Read more

Some of you might remember my concerns about the new $25 submission fee for the 2018 International Conference on Creationism .  Well, we came up with a pretty good idea for CBS members to get around that.  At the CBS Executive Council meeting, we decided to pay the registration fees for up to twenty CBS members submitting papers to the ICC.  You can find all the details at the Creation Biology Society website . To be completely up front with everyone, I want to explain exactly how this is going to work.  The Executive Council will be choosing which papers are going to have their submission fees paid, and EC members are eligible to have their own submission fees paid.  We talked about excluding EC members from consideration, but we decided it would look weird to have other papers sponsored but not our own.  Besides, it's just $25, and I don't think it's that big a deal.  I prefer to think of it as a means of encouraging quality submissions to ICC. So I hope everyone will
Read more 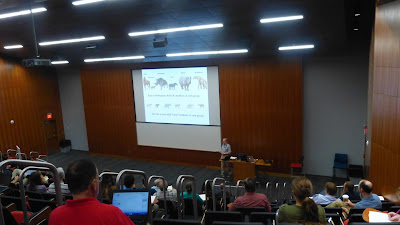 A big thank you to everyone who participated in this year's Origins conference, but especially to Marcus Ross and the folks at Liberty University for working hard to host us.  We had 58 folks registered for the conference and twenty technical presentations.  The test screening of Is Genesis History? was a big highlight of this year's conference also.  The abstracts for this year's conference are now available for download right here: Biology Abstracts Geology Abstracts Also for those who inquired, here is a link to our special issue on human origins, which features three technical articles on Homo naledi . Human Genesis 2016 If you are interested in submitting a paper for the 2017 human origins special issue, please see the call for papers .  Submissions are due December 30, 2016. Next year's Origins 2017 conference will be held at San Diego Christian College on July 19-22 . Abstract submissions will be due in the spring, and we'll send out a c
Read more

Arrival and Registration If you are flying, please send us your flight information so we can be sure you have a ride from the airport.  Email info@coresci.org On Wednesday afternoon, conference registration will be held at the Sleep Inn at 3620 Candlers Mountain Rd, Lynchburg, VA  24502.  Ticket holders with a hotel room will also be staying at this location. The conference meetings will be held in Science Hall 128, where registration will take place on Thursday through Saturday (if you arrive late).  We will have our meals in the dining commons.  To find these buildings, please visit Liberty's campus map at http://www.liberty.edu/map/ For the Field Trip You must wear boots.  We'll be visiting an active quarry that requires boots (not shoes).  If you do not wear boots, you'll have to wait outside the quarry. If you do not plan on coming to the field trip, please let us know so we can get an accurate count for lunch.  If you have specific dietary needs for the b
Read more

A special movie screening at Origins 2016

We've got a special event for this year's Origins conference, and I wanted to tell you a little about it.  Thomas Purifoy of Compass Cinema is bringing an early edit of their new documentary film Is Genesis History?   We'll be screening the movie on Friday afternoon of the conference, but this will be a different sort of screening.  Instead of just running the movie as-is, we'll be stopping for comments periodically as we view the whole film.  We want to use this as an opportunity to get feedback from some of the folks in the movie, like me.  We'll also have forms for people to write down their comments, in case you don't want to talk in front of the crowd. To learn more about Is Genesis History? visit their website .  If you'd like to attend Origins 2016, there are still a few tickets left.  You can get them at the conference website . Feedback? Email me at toddcharleswood [at] gmail [dot] com. If you enjoyed this article, please consider a contribu
Read more

A preliminary schedule for Origins 2016 has been posted at the conference website.  Check it out at http://origins2016.eventbrite.com .  A highlight this year is a special sneak preview screening of a documentary that several of our members appear in.  Currently, there are only a few spots left at the hotel, so hurry and register if you want a spot at the hotel.  If you prefer getting your own accommodations, there are plenty of regular tickets left.   All tickets include the conference, meals (lunch and dinner), the movie screening, and the field trip. http://origins2016.eventbrite.com Feedback? Email me at toddcharleswood [at] gmail [dot] com. If you enjoyed this article, please consider a contribution to Core Academy of Science. Thank you.
Read more

The question of our own human creation has become increasingly contentious among evangelical theologians and scientists.  Some theologians insist that the historicity of Adam and Eve is not theologically important, and evolutionary scientists continue to maintain that human evolution does not support the descent of modern humans from a single couple.  New fossil discoveries regularly grab the spotlight with headlines proclaiming a new human “ancestor.”  Traditional beliefs in a historical Adam and creationism seem to be losing popularity among college-educated evangelicals. In response to this growing enthusiasm for evolution, the editorial board of the Journal for Creation Theology and Science Series B: Life Sciences has launched an annual special issue devoted to multidisciplinary, young-age creationist perspectives and research on human origins.  The first human origins issue with nine open-access papers was published online in May, 2016 and received more than 1700 views in n
Read more
More posts