Showing posts from March, 2016
Show all

The Call for Abstracts for Origins 2016 is now available at the CBS website .  Here is the announcement: The annual summer conference of the Creation Biology and Creation Geology Societies will be held at Liberty University in Lynchburg, VA on July 21-23, 2016.  We invite high-quality abstract submissions relevant to the life and earth sciences and the issue of origins.  Submissions must offer positive, constructive interpretations or criticisms.  All abstracts will be reviewed by an editor for suitability and content.  Submissions will be judged on scientific merit, adherence to the guidelines, and relevance to creationism.  Authors of accepted abstracts will be invited to present at the conference, and all accepted abstracts will be published in the Journal of Creation Theology and Science . Guidelines Abstracts should not be longer than 700 words, including references. Any references must conform to the style guidelines of JCTS . An abstract should be a complete summary of the
Read more

This week,  Nature  published a paper by Meyer et al. looking at the ancient nuclear genome of hominins from Sima de los Huesos in northern Spain.  I heard about this research last fall in a news article about a conference in Europe, and I've been anxious to read the paper, since the results throw an interesting new wrinkle into our understanding of ancient humans. Sima de los Huesos ('pit of bones') is a fossil site in the Atapuerca Mountains of northern Spain where remains of ancient European hominins have been discovered.  There is much that could be said about the remains (it's a UNESCO World Heritage Site, after all), but I'm most interested in what we call these hominins.  Some have argued that they are Neandertals, but others have claimed that they have traits in common with a group called Homo heidelbergensis .  Originally described in 1908 from a mandible found near Heidelberg, Germany, Homo heidelbergensis  was more recently expanded to include the Brok
Read more

What Happened in the Garden? 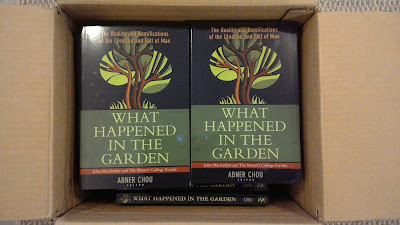 Look what I just got! Several years ago, I was invited by Joe Francis at the Master's College in California to co-author with him two chapters on human origins for a book addressing the historical Adam debate.  Our chapters are on human fossils ("Adam and the Animals") and human genes ("Genetics of Adam").  The other chapters are written by TMC faculty and by John MacArthur.  It's been a long time coming and a lot of work by the editor Abner Chou, and it's great to finally see it in person! Here's the table of contents: “Did God Really Say?” Hermeneutics and History in Genesis 3: Abner Chou Adam and the Animals: Todd Charles Wood and Joseph W. Francis Genetics of Adam: Todd Charles Wood and Joseph W. Francis Genesis 3—A Map of Misreadings: Grant Horner Genesis 3 and Original Sin: Paul R. Thorsell A Woman’s Seed: William Varner After the Fall—Three Effects on Human Enterprise: R. W. Mackey II Thermodynamics and the Fall—How the Curse
Read more
More posts