Showing posts from August, 2012
Show all

August 22, 2012
This was not unexpected.  As you probably know, paleontologist Phil Senter has been producing a number of anticreationist papers that are quite a bit more creative than the usual anticreationist drivel.  In 2010, he published a paper critical of statistical baraminology in Journal of Evolutionary Biology , which I blogged about .  Then I wrote a response, and to my shock  JEB  published it, which I also blogged about .  Then Phil published a response to my response, which I blogged about thirteen months ago. That was the last time I mentioned this little exchange, since it took that long to do the largest statistical baraminology study ever in order to address what I felt were misconceptions about baraminology.    If you'd like more detail on the content of that project, you can check out my abstract from this year's Origins conference (the last one in this PDF ). This time, though, the JEB editor was not so favorable, and he declined to send my paper out for review.  I t
Read more

August 19, 2012
I mentioned previously that  JCTSB  had begun issuing calls for papers for theme issues (the current call is here ).  We have two of these theme issues in editing right now, and I'm pleased to announce the publication of our first issue dedicated to the theme of Biological and Genomic Change .  This one was kind of a surprise, since we didn't formally solicit manuscripts for it, but after we received two manuscripts on a similar subject, we made a theme issue out of them.  Here are the contents: Of Batons and Themes - Sanders Doing the Karyotype Shuffle - Bedinger Ancient mtDNA Implies a Nonconstant Molecular Clock in the Human Holobaramin - Wood The introductory essay serves both as a preface for this issue and Roger Sanders's last hurrah as JCTSB editor.  Seems like just yesterday I read an email from Roger on our old BSG mailing list suggesting that we start our own journal.  So I said, "Great, you be the editor!"  And the rest is history. Bedinger&
Read more

August 14, 2012
Update:  Good grief, I just realized the title of this post should be "interbreeding" not "inbreeding."  Inbreeding makes no sense.  Sorry about that. Via Nature 's blog , we learn of the pending publication of new papers examining the curious observation of Neandertal alleles in modern Eurasian genomes.  To review, when the Neandertal genome was published, researchers discovered a curious pattern: Neandertal gene sequences matched Eurasian sequences significantly more often than African sequences.  This was interpreted as evidence of interbreeding between the Neandertals and the ancestors of modern Eurasians.  There are other possible explanations, one of which is incomplete lineage sorting.  Here's how that works: For any population of critters, the gene pool (all the copies of genes in each organism in the population) is a mixture of genes that are very similar and some genes that aren't all that similar.  When the population divides (as it does d
Read more

August 13, 2012
Some of you have asked for more information on the theology presentations from Origins 2012.  This was the first year we intentionally expanded our focus on formal biblical studies and theology.  Some of the speakers granted us permission to post their powerpoint presentations on the CBS website, and we've also added the abstracts that were submitted in response to a special theology call for abstracts.  You can find all of those items at the CBS website: Origins 2012 Theology Presentations Feedback? Email me at toddcharleswood [at] gmail [dot] com.
Read more 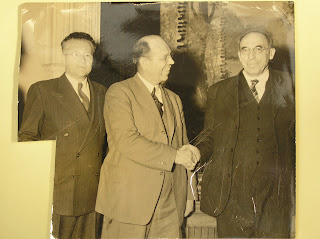 My wife is the college archivist, and she loves to fill me in on all the gossip from 60 years ago.  Her latest discovery left me oddly giddy, and here it is: This photo came from an envelope marked "guest speakers at Bryan," and the men in the photo are all identified on the back (but no date is given).  On the left is H.O. Van Gilder Sr., who was a Baptist pastor and the first national representative of the General Association of Regular Baptists.  He apparently set up their Chicago office, where my Aunt Linda worked for years.  Small world!  The jovial fellow in the middle is R.G. LeTourneau, whom you might remember from the Christian university named after him .  The guy on the right was the real shocker.  That's B.H. Shadduck!  Author of Puddle to Paradise  and Jocko Homo Heavenbound .  Focus of my ire and scorn as author of "one of the worst antievolution pamphlets I've ever seen," the racist Rastus Augustus Explains Evolution .  Apparently, that B
Read more

JCTSB call for papers on symbiosis and relationship

August 08, 2012
Last year, the CBS pioneered a new, more active editorial process for our journal JCTS Series B: Life Sciences .  Behind the scenes, we solicited papers for a theme issue that I'll tell you about later (because it's still behind the scenes!), and we issued an open call for papers on the subject of baramins .  We were pleasantly surprised by the response, so we knew we'd have to do it again.  At this year's conference we brainstormed on theme ideas and finally settled on Symbiosis and Relationship.  What does that entail?  A lot, really.  Everything from general ecological relationships to invasive species to host/parasite relationships to predator/prey relationships to mutualistic symbioses.  We'd be interested in reading manuscripts on alleged genomic parasites, microbes, metazoans, plants, fungi, even entire ecosystems.  Paleo people aren't left out either: a common theme in creationist paleontology is the ecological zonation theory (either Clark's classic
Read more

August 07, 2012
There's a new book on creationism coming from Pacific Press, and this one looks to have some very interesting theological chapters (nothing against the science chapter titles, but the theology really caught my eye).  It's edited by Bryan W. Ball, and it's called In the Beginning .  Chapters include: 1.  Revelation and the Authority of Scripture      Bryan W. Ball 2.  The Transmission and Credibility of the Genesis Text     Robert K. McIver 3.  The Word Speaks for Itself: A Theology of Scripture     Jo Ann Davidson 4.  Genesis: Introduction to the Canon and to Biblical Theology     H. Ross Cole 5.  A Theological Reading of Genesis 1     Laurence A. Turner 6.  The Origins of Genesis Reconsidered     Bryan W. Ball 7.  Understanding the “When” of Creation in Genesis 1-2     Richard M. Davidson 8.  Biblical Theology and the Doctrine of Creation     Paul B. Petersen 9.  The New Testament Use of the Genesis Text     Steven Thompson 10.  Chr
Read more

August 06, 2012
Last year at Origins 2011 in Rapid City, Marcus Ross of Liberty University presented a paper on the Flood/postFlood boundary as it relates to North American mammal stratigraphy, and the latest Journal of Creation  has the full paper (which is currently not online, so you'll have to get the paper edition to read it).  The idea is pretty simple: Given that the Flood account in Genesis appears to require absolute extinction of terrestrial mammals globally and then repopulation of the earth from animals coming off the Ark in the Middle East, we should expect to see a pretty big stratigraphic and geographic discontinuity.  Otherwise, we have to make ad hoc assumptions about animals migrating to the Ark, surviving the Flood, then migrating back to the exact spot they lived before the Flood.  One such example would be hard to swallow.  Many such examples would suggest we've misinterpreted which sediments are really post-Flood. For North American terrestrial mammals, Ross found that
Read more

August 01, 2012
I gotta say, it's a pretty weird feeling pulling a magazine out of your mailbox and seeing your own face on it.  Perfect strangers suddenly know a whole lot more about me, but judging by the reactions I've seen, some folks haven't learned very much.  I'm fascinated by how individuals read into this article things they wanted to see.  Those who reacted best were those who already know me.  One person at church observed that it must have been a pretty slow news month to put my mug on a magazine.  He's probably right about that. A few things I've learned from the reactions to the CT article and my Surrender essay: 1.  It's really, really, really hard to talk about this issue without insulting someone, even when we try not to.  I don't know that there's any way to get around that, because there's always going to be somebody who's miffed about something.  More importantly, I think it illuminates the fears and anxieties that drive many of us
Read more
More posts