Showing posts from September, 2017
Show all

Homo naledi: there is another 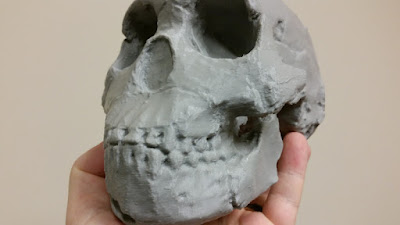 In case you don't keep up with such things, the underground astronauts have resumed excavating fossils from the Rising Star cave.  They're recovering bones of Homo naledi at both the Dinaledi (101) and Lesedi (102) chambers.  This morning Lee Berger tweeted about a third site in the same cave system:

Assessing this morning the possibility of preparing a possible #hominin tibia in situ at site 103 in #Risingstar#Homonaledi - 2 dangerous pic.twitter.com/WTDeaVjVGD — Lee Berger (@LeeRberger) September 18, 2017As I've noted before, a second fossil site (Lesedi) suggests that the entire cave system was being used for deliberate burial of Homo naledi.  Using Dembski's design filter, we can rule out chance as a cause by using specification, characteristics of an event that suggest deliberate or intentional action.  In Rising Star, we might argue for chance if we found one chamber of hominin bones, even though the characteristics of the original Dinaledi chamber are extremely…
Read more 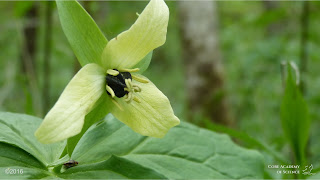 The week of the big eclipse, our longsuffering intern came back to town for her final semester at Bryan College.  She had spent the summer interning elsewhere and learning the latest techniques in DNA sequencing.  Her project with us is our ongoing studies of mutant trillium flowers.  We hoped last year to sequence at least one floral gene from our mutant flowers, but our approach didn't work.  Thanks to your support for our building project, we are currently buying the equipment needed to continue this work at the new Core Academy facility.  We are very thankful that we'll be able to streamline our work on this project.

One thing was still lacking though: We don't have a DNA sequencer on site, but our intern shared with me about a new gadget that allows you to sequence DNA using a USB device that plugs into your laptop.  No, I'm not kidding.  For those in the know, it uses nanopore technology, and it's designed for portability.  It's called a MinION, and the …
Read more

About those Trachilos tracks 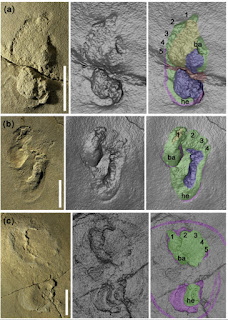 I suppose I should say something about the Trachilos tracks. I've received a couple messages about this on Twitter and Facebook. Scientists from a mostly European collaboration announced today that they have discovered early hominin trackways from northwest Crete. They date the tracks to around 5.7 million years ago (late Miocene). Unsurprisingly, headlines claim that this is a "huge" "game-changer" and "challenges theories of human evolution." Let's see what the hype is about.

First of all, these are some smudgy footprints. Here are some clear ones that the authors included in their paper to support their anatomical inferences.


Note the 5 cm scale bars. Prints A and B are about 10 cm long, and C is about 12-15 cm. That's four to six inches for us Americans. By contrast, my foot is about a foot long. The smudginess of individual prints does nothing to detract from the bipedal appearance of the tracks though. Check out this shot: