Showing posts from August, 2011
Show all

Geocentrism in the news again?

August 30, 2011
There's an odd article from Chicago Tribune religion reporter Manya Brachear on the "Galileo was Wrong" crowd. Titled " A few Catholics still insist Galileo was wrong ," the article is a very neutral introduction to the modern geocentrist "revival" spearheaded by Robert Sungenis. You might recall these guys from my own visit to last year's "Galileo was Wrong" conference in Indiana in November, 2010, which I chronicled in a series of posts ( one , two , three , four , and five ). What makes this new article odd is that I can't tell why the story exists. There doesn't seem to be any "Galileo was Wrong" events on the near horizon that were being promoted. The big conference was nine months ago, so it's not exactly a timely report. If it was meant as a kind of report on the movement, it's not even very accurate. Brachear claims in her article that "Hundreds of curiosity seekers, skeptics and supporters
Read more

August 29, 2011
Here's a very brief update to our journal club schedule this fall: On October 25, we will be welcoming a very special guest speaker to the Bryan College campus. Ornithologist Jon Ahlquist will be giving a presentation on his research at 5 p.m. in Mercer Hall 137. Dr. Ahlquist worked with Charles Sibley for 30 years on studies of genome similarity and bird classification and co-authored with Sibley the 1990 book Phylogeny and Classification of Birds from Yale University Press. Feedback? Email me at toddcharleswood [at] gmail [dot] com.
Read more

August 26, 2011
It's been pretty quiet around the blog lately, as I've been pretty busy in the "real world." Classes just started, I've got a busy research project, and so there's not a lot of time for blogging. But today I see Science has two new items on Denisovans, those elusive Neandertal cousins from Siberia, and those Denisovans always get my attention. You might recall that we know quite a lot about Denisovans from their genome, sequenced and published last year. What we don't know is what they looked like. The only fossils we are sure came from Denisovans are teeth and a finger bone. So they're a genome in search of a fossil record. Kind of the opposite of what we usually have. The first piece in Science is a report from Ann Gibbons on a July meeting of human origins researchers in the Altai Mountains at the Denisova Cave. Not a lot of earth-shattering revelations, except that one more Denisovan tooth has been identified. One of the researchers
Read more

August 18, 2011
Each semester, CORE sponsors a discussion group on campus to examine recent publications that are relevant to the creation/evolution debate.  We meet every other Tuesday in Mercer 137.  If you are on campus or nearby and you'd like to participate, we welcome you.  The schedule for the fall semester has been posted at the CORE website.  Check it out if you can! Feedback? Email me at toddcharleswood [at] gmail [dot] com.
Read more

Dose of reality on Adam and Eve

August 15, 2011
Seems everybody's talking about that NPR story on Adam and Eve last week. I got emails, people asked me about it personally, and there were some blog posts (of course). What's my perspective I've shared my thoughts on Adam and Eve before , but there's one more point I want to make. The NPR story and the Christianity Today cover story might give one the impression that this is a major debate in evangelical Christianity. I think that's a mistake. Those individuals who now question the historicity of Adam and Eve, or rather who question the theological importance of a historical Adam and Eve, represent a minority view in evangelical Christianity. I can cite two sources to back up that claim. First, the survey done for AIG's book Already Compromised looked at Christian college presidents, academic vice presidents, and heads of religion and science departments. The pool of Christian colleges was largely the Coalition of Christian Colleges and Universiti
Read more

August 12, 2011
Paul Garner reports that his book The New Creationism has just been reprinted for the third time! Awesome! (That's considerably better than my one meager foray into the book publishing world.) The New Creationism is quite a good book, and if you haven't read it, what are you waiting for? Feedback? Email me at toddcharleswood [at] gmail [dot] com.
Read more

August 08, 2011
The summer is rapidly coming to a close. I've returned from the last of my travels, I'm seeing a lot of my faculty colleagues on campus again, and in one short week, I'll be in faculty workshop again. I didn't even get half the stuff done this summer that I wanted to. That's pretty typical though. So what's coming up this fall from CORE? Roger and I will be working on several special issues of JCTSB , including one on the baramin . That means we'll be writing some new papers summarizing some of our research on carnivorous plants and the verbena family. I'll also be working with Marcus Ross and Paul Garner on our Avialae paper. To top all that off, I've started a significant research project as a response to Senter's criticisms. It goes way beyond dinosaurs, though, and it could potentially change everything that's been happening in baraminology over the last decade. Big stuff. Over at the Creation Biology Society, I've alread
Read more

August 04, 2011
From the website of the Creation Biology Society : Journal of Creation Theology and Science Series B: Life Sciences Special Issue: Baramins Call for Papers The editorial board of JCTSB is planning to publish a special issue in summer 2012 with the theme of identification of baramins. Papers suitable for this issue include reviews of the hybridization literature of particular groups or full-blown original statistical baraminological analyses. Methodological papers or critiques will also be considered. Longer papers will be published as research articles; shorter papers (e.g., former abstracts expanded to include more detailed methods, data, and results, as well as brief discussions) will be published as research reports. Each paper should be written according to the standard JCTSB formatting requirements. We invite researchers to submit appropriate papers via the User Home Page of the JCTSB website ( http://www.bryancore.org/jcts/ ) upon registering with the journal. Questi
Read more

August 02, 2011
Recently I attended Origins 2011, the annual conference of the Creation Biology Society (of which I'm president), where I presented the results of my most recent creationist research and gave a talk on the status of creationist biology 50 years after publication of The Genesis Flood . You'd think all of this creationist activity would reveal the true status of my opinions about creationism (namely, that I'm a creationist! ), but some rumors just won't die. While I was at Origins 2011, the good folks over at Uncommon Descent, the main blog for discussion of Intelligent Design (the idea that there is real, scientific evidence for design in the world) posted a piece denouncing my research on the chimp genome . The original post is riddled with errors. For example, William Jennings Bryan did not recommend the form of the Butler Act that was adopted by the Tennessee legislature. Bryan objected to imposing a punishment on those who broke the ban on teaching human
Read more 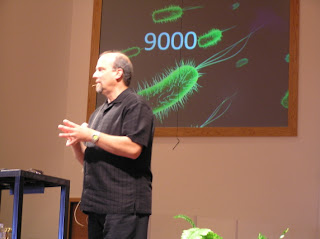 On the final day of Origins 2011, we tried something new: a conference specifically designed for the general public. I think it went well, and we learned a lot of things that will hopefully improve next year's conference tremendously. The final panel discussion on Already Compromised was especially intriguing and eye-opening. I think folks experienced a bit of discomfort with the revelation that most Christian colleges (even the creationist ones) teach about evolution. We don't teach that evolution is true, of course, but we definitely teach information about evolution so that our students will be prepared when they encounter it after graduation. Here's a few images from our final days in South Dakota: Joe Francis talking about microbes (one of his favorite topics): Some of the posters presented at the conference: Paul Garner at Mt. Rushmore (or a reasonable facsimile thereof at the Reptile Gardens ): Feedback? Email me at toddcharleswood [at] gmail [do
Read more
More posts