Showing posts from July, 2013
Show all

The Core Academy short course series begins this weekend with "The Historical Adam," featuring me talking about all manner of issues related to the historical Adam debate.  We're really striving for a different sort of take on "debates" and controversial issues in general, and I guarantee that you've never heard an evangelical approach the debate in quite the same way.  I encourage you to check it out and let us know what you think. The course will roll out in weekly lessons for the next six weeks.  I had initially advertised that we'd have the whole thing ready to go at the start of the course, but that didn't happen.  So we'll start next week with lesson 1, and then release an additional lesson weekly for five weeks, making six lessons in all. If you've already signed up for the course, you'll be receiving information about accessing the lessons this week.  If you haven't signed up, you can still get in on this FREE  course righ
Read more

Reminder: Origins 2013 is this Sunday

Wow, time flies!  This Sunday, the annual conference of the Creation Biology Society and the Creation Geology Society will be held at the Clarion Hotel and Conference Center in Pittsburgh.  AIG's Andrew Snelling will be our featured speaker for the afternoon conference, and the conference will include a catered lunch.  Get more details (including the full schedule) at the Origins 2013 website , or register online right here: THIS IS YOUR LAST WEEK TO REGISTER! Feedback? Email me at toddcharleswood [at] gmail [dot] com.
Read more

July 26, 2013
Earlier this year, the old Center for Origins Research became a victim of budget cuts after a serious enrollment shortage at Bryan College.  Some folks were pretty upset about the loss of CORE, but I tried to be a bit more circumspect about it.  After all, I'm not the president of Bryan College, and I don't have 200+ employees that I am responsible for.  If I were in that position, I can't say that I would never cut a few jobs to save the rest.  It's just part of the reality of managing a large organization. Then as we tried to get CORE adopted by another institution , over and over we were told that enrollment was down and budgets were being cut everywhere.  Even after we had extensive conversations with one university, they still couldn't take us on, since they were also trying to cut 10% out of their budget.  It seemed to me that what happened at Bryan was not unique. Yesterday, the New York Times  published a piece confirming that schools across the nation
Read more

July 23, 2013
This is really interesting. The visuals and soundtrack are impressive, but watching Neil deGrasse Tyson trying to be dramatic made me giggle.  But then, watching any serious scientists - especially me - trying to be "dramatic" usually makes me chuckle.  I also winced at the shot of the guy being burned at the stake, but what can we expect?  It is  a sequel to  Cosmos after all. Read all about it: Neil deGrasse Tyson says long-awaited Cosmos  sequel tells 'greatest story ever told' Feedback? Email me at toddcharleswood [at] gmail [dot] com.
Read more 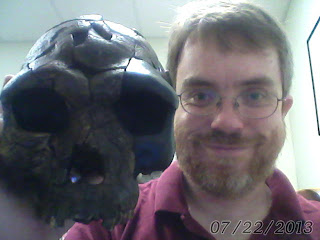 Wow, we just got back from our first big homeschool curriculum fair in Chattanooga and what a show it was!  The curriculum fair was organized by CSTHEA , and there were more than 1200 families that came through over the weekend.  As I said, it was our first time, and it was very eye-opening for us.  We realized that we need to work on our booth presence to "spice up" our presentation, but we had lots of great conversations with numerous families struggling with science education. I'm also very grateful for those who came to hear my presentation "Learning Science without Losing your Faith."  It wasn't a packed crowd, but the response was great.  I'm pondering how I'm going to package that presentation for a wider audience, because I think it's a very important message.  Stay tuned for more on that. This weekend, we'll be at the Southeast Homeschool Expo at the Cobb Galleria north of Atlanta.  I'll be presenting "Learning Science
Read more

July 17, 2013
As part of a collaborative research team, Roger Sanders recently received a research grant to evaluate bark beetle infestations in the western U.S. based on creationist ideas about symbiosis and population control.  Read all about it in the official press releases: Core Academy of Science - Roger Sanders receives research grant The Master's College - College awarded grant to study beetle infestation Feedback? Email me at toddcharleswood [at] gmail [dot] com.
Read more

July 16, 2013
Got a lot cooking lately (video editing has become my taskmaster), but I wanted to remind everyone to sign up for Origins 2013 if you're planning to come.  It's Sunday afternoon just prior to the start of the ICC, so if you're going to ICC, you can pop in to our meeting also with minimal fuss.  Read all about it here: http://origins2013.eventbrite.com/ Feedback? Email me at toddcharleswood [at] gmail [dot] com.
Read more

July 04, 2013
To achieve true internet notoriety, I am given to understand that one needs a cute cat video. Feedback? Email me at toddcharleswood [at] gmail [dot] com.
Read more

July 01, 2013
On our first day of independence, I wanted to make sure everyone was on the same page. For the short term, parts of the bryancore.org webserver will remain online.  That means you can continue to use BDISTMDS, which is not yet on the new server at coresci.org.  We will keep BDISTMDS available on bryancore until August.  After that, the future of BDISTMDS is uncertain.  I would be extremely grateful for someone with programming skills to help move the software to its new home, since I have no time to do so. The  Journal of Creation Theology and Science  will now be hosted at http://www.coresci.org/jcts .   CELD and the old CORE library catalog have also moved to new homes.  These services are no longer available on the bryancore server as of now. All bryancore.org email addresses will cease to function as of this week.  Everyone who needs our new personal addresses should already have them.  If anyone else needs to contact one of us, please use info {at} coresci {dot} org . F
Read more
More posts