Showing posts from May, 2013
Show all

Poythress on the Adam debate

May 28, 2013
A few weeks ago I was alerted to Vern Poythress's new article in the latest Westminster Theological Journal , entitled "Adam versus Claims from Genetics." Poythress is a professor at Westminster Seminary and the author of Redeeming Science , where he argues for a form of old earth creationism. He has a Ph.D. in math from Harvard and a Th.D. in New Testament from the University of Stellenbosch. So I read his article, which you can find at his personal website or reposted at the World magazine website. Honestly, it wasn't something that I wanted to blog about, but then I kept getting more and more emails about it, and it showed up on the World magazine website, so I figured I should say something. So... The article opens with a brief discussion of the similarity of the human and chimp genomes, and while Poythress says that 99% identity is an oversimplification (which is certainly true), he doesn't just say how similar he thinks the chimp and human genome
Read more

May 27, 2013
On the front page of today's Chattanooga Times Free Press , you'll find an article called "Between Science and the Cross," and it's a really nice piece on the launch of Core Academy.  For those who don't have access to the paper, here's a link to the online version: Between Science and the Cross Feedback? Email me at toddcharleswood [at] gmail [dot] com.
Read more

May 19, 2013
The Creation Biology and Creation Geology Societies are pleased to announce Andrew Snelling as our featured speaker for our joint annual conference, Origins 2013 .  We're going to meet on Sunday afternoon, August 4, just before the start of the International Conference on Creationism .  The conference will feature a catered lunch, research presentations from our members, and a plenary talk by Dr. Snelling: "Radiohalos: Fingerprints of Creation or of the Flood?" Since this is an abbreviated conference we're charging just $45 for members and $80 for nonmembers.  Membership is open to anyone interested in the work of the CBS, and it costs only $20.   Click here for more information on CBS membership . To register for the conference, please visit our registration page at http://origins2013.eventbrite.com . Feedback? Email me at toddcharleswood [at] gmail [dot] com.
Read more

May 15, 2013
A few interesting articles came out recently, and I thought you might like hearing about them. First, in the May 10 Science  comes a report of a new "breed" of mosquito that is resistant to infection by the malaria parasite Plasmodium falciparum .  Malaria is normally transmitted by the bites of malaria-infected mosquitoes, and one obvious means of combating malaria is to target the mosquitoes.  Typically, this is done with insecticides that kill the mosquitoes, but this new report indicates an intriguing new method of control: infecting mosquitoes with Wolbachia .   Wolbachia  is a bacterial symbiont of some insects, and Bian et al. report that they've developed a bacterial strain that will form a stable - and heritable - relationship with one of the mosquitoes that transmits malaria.  Mosquitoes carrying the Wolbachia  symbionts are resistant to malaria.  Think about that: A bad relationship (malaria-mosquito) is prevented by establishing a beneficial one ( Wolbachia
Read more 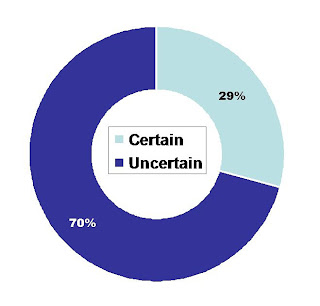 Today, BioLogos posted an article about a survey on pastors' views of origins that BioLogos commissioned from Barna.  The results confirm my own experience: most pastors are creationists (69%), and most of them are young-age creationists.  Theistic evolution accounts for only 18% of respondents, and only 3% of respondents are described as "absolutely certain" of theistic evolution.  It's that certainty statistic that really caught my eye. BioLogos classifies the respondents primarily according to their position on origins (young-earthers, old-earthers, theistic evolutionists), but they also include that secondary classification based on "certainty" for every position.  If we disregard the origins positions and instead make certainty vs. uncertainty our primary classification, we find a really striking result: I don't know about you, but when I hear the various parties debating origins, I get the sense (sometimes explicitly stated) that everyone&
Read more

May 07, 2013
I've been asked again about what books I recommend, so I thought I'd revise and republish my previous summer reading post .  Please remember that a recommendation is not an endorsement.  Sometimes you ought to read books you just don't agree with, for a variety of reasons.  For some of those books on this list, I recommend them because it would be irresponsible not to read them (like Origin ).  Don't consider it an "exercise in critical thinking" either.  Read these books to understand what their authors want you to know.  You don't have to believe it of course, but you need to be aware of it.  Anyway, on with the list, in no particular order. 1. The Creationists , by Ron Numbers - This will give you an inside look at the emergence of the modern creationist movement but from a biased perspective. Numbers wants to reduce creationism to an aberration of SDA theology. You might remedy that bias by reading my own paper "Species variability and creati
Read more

May 06, 2013
According to this announcement , Eugenie Scott, the current director of the National Center for Science Education (NCSE) will retire this year.  For those who don't keep up with all this stuff, NCSE was exclusively an anticreationist advocacy organization for nearly its entire existence, until it recently launched a climate change initiative.  (I've always found the name of the organization a bit of a misnomer, since it doesn't really do much for science education as a whole.) My own experiences with NCSE and Genie Scott were decidedly mixed.  I've generally found the NCSE to be a typical advocacy group with the accompanying blinders on their own weaknesses and biases.  In other words, their publications tend to be about as oversimplified and error-prone as anything else in the creation/evolution debate.  On the other hand, the one time I heard Genie Scott in person , I found myself agreeing with a lot of her points. I'm surprised that she's retiring mostly
Read more
More posts