Showing posts from April, 2011
Show all

April 29, 2011
This week's Science is reporting additional remains of Au. sediba from Lee Berger's team in South Africa. There are four individuals, including an infant. Given the controversy I stirred up this time last year when I published a paper suggesting that Au. sediba should be included in the human holobaramin , I found this little snippet extremely interesting: The team calls the hominin an australopithecine because it had a small brain and “overall body plan” like that of an australopithecine, team member de Ruiter said in his talk. But the fossils also show some surprisingly modern traits usually found only in members of our genus, Berger said. The two pelvises, in particular, are capacious and elongated, resembling those of Homo. In his talk, Berger ticked off a list of other modern traits, including smaller teeth, short hands, and an elongated thumb. Last year, my critics relished pointing out all the characteristics of sediba that were very different from Homo sapiens
Read more 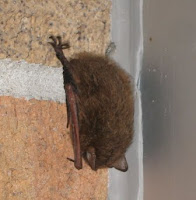 I came to work a few days ago, and I found this little guy sleeping on the wall next to the museum door. We had some pretty hard rain the night before, so our entrance way became an emergency bat shelter. Feedback? Email me at toddcharleswood [at] gmail [dot] com.
Read more

April 21, 2011
Back when I was pondering grad school, everyone told me to study molecular biology because there was a great demand for molecular biologists. So I followed that advice, and so did thousands of others. Now the job market for folks with a molecular bio background is extremely competitive, and the Ph.D. is simply not enough to ensure a successful career. The latest Nature has some articles on this problem, and they're pretty blunt. Check out Mark Taylor's take on the situation: The system of PhD education in the United States and many other countries is broken and unsustainable, and needs to be reconceived. In many fields, it creates only a cruel fantasy of future employment that promotes the self-interest of faculty members at the expense of students. The reality is that there are very few jobs for people who might have spent up to 12 years on their degrees. ... There are two responsible courses of action: either radically reform doctoral programmes or shut them down. They
Read more

April 20, 2011
Very interesting paper in this week's PNAS . Here's the abstract: Impact of gene expression noise on organismal fitness and the efficacy of natural selection Z. Wang and J. Zhang Gene expression noise is a universal phenomenon across all life forms. Although beneficial under certain circumstances, expression noise is generally thought to be deleterious. However, neither the magnitude of the deleterious effect nor the primary mechanism of this effect is known. Here, we model the impact of expression noise on the fitness of unicellular organisms by considering the influence of suboptimal expressions of enzymes on the rate of biomass production and the energetic cost associated with imprecise amounts of protein synthesis. Our theoretical modeling and empirical analysis of yeast data show four findings. (i) Expression noise reduces the mean fitness of a cell by at least 25%, and this reduction cannot be substantially alleviated by gene overexpression. (ii) Higher sensitivity of
Read more

April 19, 2011
As I'm putting the finishing touches on my own abstracts, I thought I should remind everyone that abstracts for the 2011 joint conference of the Creation Biology Society and Creation Geology Society are due at the end of the month (that's next week). CGS call for abstracts CBS call for abstracts You can also register for the conference or just get more information on venue, schedule, etc. right here . Feedback? Email me at toddcharleswood [at] gmail [dot] com.
Read more 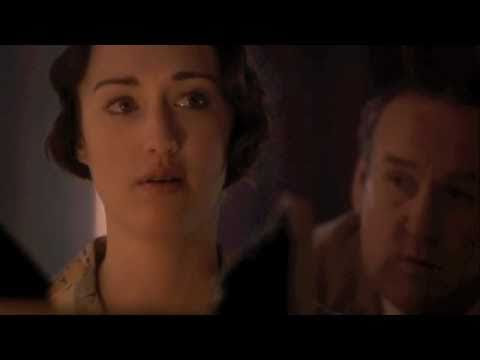 I've mentioned the new Scopes trial movie "Alleged" several times now on my blog ( here and here ), which led to emails from the producer and publicist of the movie asking me if I wanted a screener to review. I've now seen the movie twice, once with my wife, and once with Bryan College's resident Scopes trial expert. I think it's a mixed bag. I should warn you now that this review will contain SPOILERS , so if you don't want to know what happens in the film, stop reading now. In an interview published by the Flint News , producer and writer of "Alleged" Fred Foote stated, My original version was very fixated on showing every little detail I thought was wrong in the old movie [ Inherit the Wind ]. Then I realized storytelling isn’t about correcting someone else’s story. It’s about telling your own story... That’s when I forgot all about 'Inherit the Wind’ and made it about how the media gave the whole world the wrong story about the S
Read more

April 13, 2011
I've been asked by one of my readers to comment on the latest paper published in BIO-Complexity . Longsuffering readers of my blog will recall that BIO-Complexity is an online, open access journal that " aims to be the leading forum for testing the scientific merit of the claim that intelligent design (ID) is a credible explanation for life ." I mentioned this journal previously with my final comment being: I see BIO-Complexity as a positive response to the challenge of put up or shut up, and that's good. I hope it will go beyond just anti-evolution rhetoric research, but I guess that remains to be seen. Some thought I was just being snarky, but I meant that. I think the ID movement has become far too associated with (appropriated by?) populist anti-evolutionism. I think that's not so good if you really want to offer a genuine alternative model to the evolutionary model of origins. The launch of Biologic, insofar as it offers a home for genuine research,
Read more

April 12, 2011
I'm doing some background research for my CBS abstracts , and I stumbled across this really interesting passage in a paper by T.H. Huxley from 1868: And, as I can testify from personal experience, it is possible to have a complete faith in the general doctrine of evolution and yet to hesitate in accepting the nebular, or the uniformitarian, or the Darwinian hypotheses in all their integrity and fullness; for many of the objections which are brought against these various hypotheses affect them only, and, even if they be valid, leave the general doctrine of evolution untouched. He's quite right about that. We can pick away all we want at uniformitarianism or natural selection or the Big Bang, and we won't really do much to erode confidence in the "basic doctrine of evolution," which Huxley defined as the belief that the present conformation and composition of the earth's crust, the distribution of land and water, and the infinitely diversified forms of animal
Read more

April 11, 2011
Kurt Wise is lecturing at Southern Adventist University this week. He'll be giving a talk titled "Caves: eroded up or down?" at 7:30 p.m. on Thursday, April 14 in the Hulsey Wellness Center. He'll also be speaking in chapel that morning (11 a.m.) on "Our dominion responsibility to the creation." Dr. Wise is professor of biology and chair of the Division of Science and Math at Truett-McConnell College in Cleveland, GA and former director of CORE at Bryan College. Feedback? Email me at toddcharleswood [at] gmail [dot] com.
Read more

April 08, 2011
There are a pair of really interesting articles in this week's Science . First, Fischer and Suttle report the discovery of a virophage (like a "virus" for viruses) that is a connecting link between double-stranded DNA viruses and the eukaryotic DNA transposon Maverick/Polinton . You might recall Liu and Soper's exogenization hypothesis that I discussed previously . One of my concerns about their idea was that it could account only for retroviruses rather than comprehensively explaining all viruses. This new virophage discovery doesn't rectify that problem, but it does suggest that there are more connections between viruses and genomic elements than we had previously guessed. Fischer and Suttle. 2011. A Virophage at the Origin of Large DNA Transposons . Science 332:231-234. Next, Himler et al. report on amazing fitness gains in an invasive fly due to the spread of a rickettsial endosymbiont. I've previously emphasized the role of transposons and
Read more

More ant genomes than you can shake a stick at

April 06, 2011
There are three ant genome sequences in the latest PNAS : the red harvester ant Pogonomyrmex barbatus , the invasive Argentine ant Linepithema humile , and the fire ant Solenopsis invicta . They've all got lots of odorant receptors and are similar to previously sequenced hymenopteran genomes from the bee Apis mellifera and the wasp Nasonia vitripennis . These ants also have the distinction of being from a single family Formicidae, which might make for interesting comparative genomics for baraminology and diversification studies. There's no direct comparisons of the three ant genomes in PNAS now, but it shouldn't take long for some researcher(s) to remedy that. The paper on the invasive Argentine ant is open access, the rest are available exclusively to subscribers. Gadagkar. 2011. The birth of ant genomics . PNAS 108:5477-5478. Smith et al. 2011. Draft genome of the red harvester ant Pogonomyrmex barbatus . PNAS 108:5667-5672. Smith et al. 2011. Draft genome
Read more

April 05, 2011
A month ago, Paul Garner drew my attention to the latest paper from Phil Senter and co-author Sally Cole, this time on a purported Native American petroglyph of a dinosaur at Kachina Bridge in Utah. According to Senter and Cole's analysis, the image that is supposed to be a dinosaur consists of both markings and natural stains. Consequently, it cannot be maintained that it is a dinosaur. Senter and Cole conclude, Pareidolia is the psychological phenomenon of perceiving significance in vague or random stimuli, e.g., seeing animals in clouds or the face of a religious figure in a food item. The results of this investigation indicate that the dinosaurs of Kachina Bridge are examples of this phenomenon and exist only as pareidolic illusions. They can therefore be added to the list of discredited evidence for the coexistence of dinosaurs and humans. Paul Garner agreed with their analysis, and posted his own photo of the petroglyph, which frankly doesn't look like much of anyt
Read more