August 08, 2016
Yesterday, the Chattanooga Times Free Press published a piece on the effort to erect a statue of Scopes trial defense attorney Clarence Darrow on the courthouse lawn in Dayton, TN, where I live.  The headline is In 'Scopes Monkey Trial' Home, an Evolution Debate Rages on.  When I first read that headline, I thought, "Oh no, what did I miss?"  Then I realized that it was the article on the Darrow statue that I'd already heard about.  So what is this debate that "rages on?"

Let me set some context here.  In 2005, Bryan College celebrated its 75th anniversary, and part of that celebration was the commissioning of a statue of their namesake William Jennings Bryan.  The statue was sculpted by Chattanooga artist Cessna Decosimo, and as far as I know, it was paid for by the college.  The county agreed to allow it to be erected on the courthouse lawn.  Even at the time, I remember mutterings about, "What happens if someone wants to erect a statue of Darrow?"  The answer I heard then was, "We let them."

Ten years later, a group calling itself the Committee to Honor Clarence Darrow finally decided to do just that.  The new statue is being designed by Zenos Frudakis, and the Committee is trying to raise the necessary money to put it on the courthouse lawn across from the Bryan statue.  Who is this committee?  Inaugural members come from the American Humanist Association, the Freedom from Religion Foundation, the Americans United for the Separation of Church and State, and the Freethought Society.  So not exactly folks I agree with.

Our local Rhea County Historical and Genealogical Society first considered the request to erect the statue in early 2015, and Society president Tom Davis said that in the interest of fairness and recognition of what happened at the trial, we should let them put up the statue.  After all, it was the conflict between Darrow and Bryan, two outspoken and passionate advocates of very different positions, that brought such notoriety to the trial.  It makes sense to honor both of them.

That attitude is the same that you'll find in the Scopes Trial Museum at the courthouse.  I remember my first time visiting the museum (years ago) and how impressed I was at the fairness with which Darrow was treated.  There's a huge display panel about him just like there's a huge display panel about Bryan.  Both of their positions are given reasonable and honest treatment.

In fact, fair and reasonable treatment has been a recurring theme over the years as I've interacted with various folks on the "other side" of the evolution debate when they talk about their time in Dayton.  Just a few weeks ago, Randy Moore and Susan Epperson were both here at the Scopes Trial Play and Festival, and they apparently had a great time.  From the things he's said, I take it that Randy is very fond of this town (he visits often), even though he's a firm opponent of creationism.

With all that in mind, what kind of debate is now raging, according to the Chattanooga Times Free Press?  I'm not sure.  The article almost undercuts its own headline.  Local newspaper editor Reed Johnson put the Darrow statue on the front page back in February: 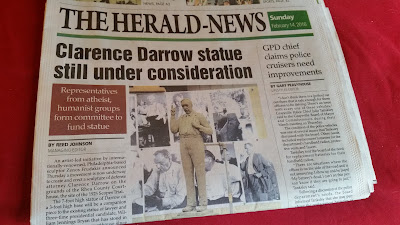 But apparently that hasn't stirred up much fuss, according to the Times Free Press:


One might expect a town that reveres Bryan to resist efforts to memorialize his antagonist, but Reed Johnson, managing editor of The Herald-News in Dayton, said that vocal resistance hasn't materialized. He doesn't recall angry letters to the editor.

But wait!  There's at least a seed of potential controversy:


County Commissioner Bill Hollin said he doesn't think many people are aware of the effort, but he's against it and thinks others will join him.

What a raging debate!  Remember everyone: Headlines are designed to get you to read the article.  This one is almost comical in how much different the headline is from the reality that the article itself describes.

So what do I think?  Honestly, I think it's a great idea.  Here's another quote from Tom Davis that the Times Free Press didn't pick up (it's from the Herald-News article):


We don't want to stir up controversy or continue the battle from the 1920s, but rather just recognize it as a major part of our history.  I think it will be a unique feature for Dayton and a good idea to have both [Darrow] and Bryan represented.  We're not advocating a position.  We are simply trying to accurately tell the story.

Well said, sir.  Darrow was just as important to history as Bryan.  When he arrived in Dayton for the trial in 1925, he was met with a crowd at the train station and treated to a special banquet just like Bryan.  That is the Dayton I know: welcoming even to people on the other side of ideological divides.  We welcomed Darrow then, and we can welcome him now.