Showing posts from October, 2010
Show all

October 29, 2010
There's a couple of interesting new papers in paleoanthropology this week. Nature has a report from Jaeger et al. on mid-Eocene anthropoid fossils from Libya. They're just teeth, but they represent taxa from Afrotarsiidae, Parapithecidae and Oligopithecidae, and there's also a species of Karanisia, which is a strepsirrhine. Why do we care? I'm glad you asked. Strepsirrhini represents the lorises, lemurs, and galagos. Haplorrhini includes the monkeys and apes, as well as those other three taxa listed above. The presence of this diverse set of primates in the mid-Eocene extends the stratigraphic range of these groups. In evolutionary terms, that means that these groups were already present in the Eocene, which Jaeger et al. interpret as evidence of much earlier primate evolution in Africa than previously expected or as evidence of migration to Africa of multiple primate lineages. From a creationist perspective, I think this is interesting especially in light of …
Read more

October 28, 2010
I'm pleased to announce that Hugh Owen, the director of the Kolbe Center for the Study of Creation, will be visiting the Bryan College campus in November to present a lecture on the creation/evolution debate from a Catholic perspective. The Kolbe Center is the leading young-age creationist advocacy group among Catholic Christians, and Mr. Owen's lecture will give our students an excellent opportunity to view the creation/evolution debate from a different theological tradition altogether. Mr. Owen will speak on Monday evening, November 15 at 5:00 p.m. in Mercer Hall 139 (the classroom right across the hall from the Henning Museum). The lecture will last about 45 minutes and is free to the public.

Mr. Owen's lecture is part of the ongoing journal club meetings sponsored by the Center for Origins Research at Bryan College.

October 27, 2010
This is getting very, very interesting. AIG has this ongoing series by Tommy Mitchell on "Arguments Christians shouldn't use." So far the series has been pretty forgettable, covering generally non-controversial subjects or arguments that are so bad that anyone can see that they're silly.

Yesterday's argument Christians should not use? Creation with the appearance of age. It's kind of a weird article though, since it takes Lisle's approach: "appearance of age" is based on extrapolations ("fallible dating methods"), but if you weren't there to see the origin you can't be sure God didn't just make it look like that. I think that's a good summary.

Anyway, I just thought it was amusing that Don DeYoung just published an endorsement of appearance of age in Journal of Creation while AIG publishes this repudiation of the very idea that something can have an appearance of age.

Meanwhile, I got an email from a reader concern…
Read more

October 26, 2010
I just got my copy of the latest Journal of Creation with several noteworthy articles. My first surprise was Peter Line's Homo gautengensis article that opens the issue. Unlike the online version, the print version stops just before the section where he criticizes my hominid baraminology paper. I suppose this could be just an editorial decision to shorten the article, or maybe Line decided to hold off his criticism until he could write a whole paper? I don't know. I'm actually disappointed, since I would prefer to cite his criticisms from a published paper rather than some webpage.

In other news, Don DeYoung has a paper arguing that appearance of age is a legitimate explanation for the starlight and time problem. In other words, he's arguing that it's theologically OK for a creationist to explain starlight as just light created "in transit." Presumably things like supernovae aren't really there. It's just light that God made. Yes, you rea…
Read more

October 25, 2010
Last week I was interviewed by Rob Zimmer and Reuel Sample on the "CrossRoads of Faith and Science" radio program, produced by the Center for Faith and Science in Knoxville. If you've got 45 minutes to kill, the podcast is here: 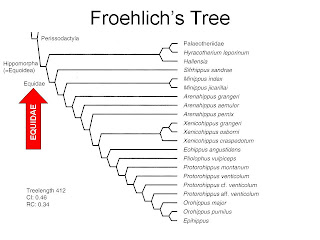 CMI posted Molén's horse evolution article on their website today. Although I already explained why Molén's article is bad, I've got another point to add to that post. Molén says this about Hyracotherium:
More recent research has reclassified these animals into ten different genera and at least three families, of which many are not supposed to have anything to do with the horse series but are similar to e.g. tapirs (family Tapiromorpha).Interesting.  I took his word for it when I wrote my first response.  That was a mistake.  Molén's reference for that claim is this paper by David Froehlich:

I just happen to have a copy of that paper in my files. Molén is correct that Froehlich reclassifies a number of Eocene 'hyracotheres' into different genera (some of which he proposed in that paper). Molén is not correct when he say…
Read more

Why do we die?

Seriously, why do humans die? Yeah, I know about the tree in the Garden of Eden and all, but why biologically do we die? Is it because we've built up a bunch of mutations that gradually kill us as we age? Or is it because we're genetically programmed to live a certain lifespan? I think it's the latter.

That's kind of counterintuitive, since you would expect the opposite to be true. Disease alleles should shorten lifespan, right? Not in th…
Read more

Center for Faith and Science International

October 18, 2010
After prayer and contemplation, I have decided to start writing articles for the Center for Faith and Science International, headquartered just up the road in Knoxville, TN. CFSI is dedicated to a pursuit of truth (which I agree with) and strives to represent accurately four different ways modern evangelical Christians approach the origins issue: evolutionary creation (AKA theistic evolution), intelligent design, progressive creationism, and young-age creationism. Needless to say, I will be representing young-age creationism. I've already got two articles posted there:

My personal goal in this series of articles is to introduce students to the best representation of young-age creationism possible. Although there is much information about young-age creationism on the internet, a lot of it is contradictory, erroneous, and sometimes even offensive. Students need a quality source for reasonable discussion…
Read more

October 12, 2010
It's fall break! At last I can catch my breath. Over the past month or so, things have been put off, including this blog. I've been saving up interesting papers to talk about, so this week I'll try to get some posts up about these. Meanwhile, I submitted my response to Senter to JEB. We'll see how it goes.

A couple weeks back in Science, McDaniel et al. reported an immensely exciting result, but I don't recall that it got a lot of press. They looked at "gene transfer agents" (GTAs), which are virus-like particles produced by alpha proteobacteria that can transfer random bits of genomes between different species of bacteria. Looking at nine strains of marine alpha proteobacteria grown in simulated ecological conditions, McDaniel et al. found that these bacteria produced GTAs and that they increased the estimated gene transfer in the ocean by a factor of thousands to hundreds of millions. Hundreds of millions. That's a lot.

The implications of …
Read more

I'm glad we can all be mature about this (LINK FIXED)

Isn't it funny how AIG is quick to point out that it doesn't take a Ph.D. to know the alleged problems with evolution, but when someone questions one of their employee's ideas, they hide behind that person's credentials?

UPDATE: While I'm fixing the link, I might add that I don't need a Ph.D. in astrophysics to recognize nonscientific special pleading.

Biggest genome of all?

In a new paper from the Botanical Journal of the Linnean Society, Pellicer et al. report that the plant Paris japonica has the largest genome of all at 152 pg. For those keeping score, that's a whopping 50 times the size of the human genome, and about 300,000 times the size of the smallest bacterial genome. Impressive.

October 07, 2010
I've always thought that the Flood must have been a bonanza for oceanic microorganisms. The ocean seriously heats up, and volcanoes kick out all sorts of interesting useful stuff (like iron). That's exactly what microorganisms love. So when I look at the cliffs of Dover, I think, "That must have been one massive bloom."

There's an interesting new paper by Hamme et al. in Geophysical Research Letters looking at the phytoplankton response to a recent volcanic eruption. Guess what? It was huge. The erupting volcano was Kasatochi in the Aleutians in 2008, and it spewed volcanic ash over a big part of the northeast Pacific. Hamme et al. describe the resulting plankton bloom as "one of the largest phytoplankton blooms observed in the subarctic North Pacific." Cool.

It doesn't really help us explain the cliffs of Dover, since Hamme et al. found that the uptake of CO2 from this event was "modest." It's still an interesting observation, …
Read more

October 05, 2010
I've had a very busy couple of weeks here, so I'm still catching up on blog-worthy news. The biggest thing I saw last week was Jason Lisle's response to a critic on the AIG website. Posed with some questions that I have wondered myself (although not so irreligiously), Lisle defends his anisotropic synchrony convention, and the result is extremely revealing.