Showing posts from December, 2012
Show all

Happy Christmas and a reminder

December 21, 2012
I'm taking a break for Christmas for the next week (at least), and I probably won't be posting much (unless something interesting happens).  Speaking of something interesting, I am aware that Christiane Amanpour has a special coming out on ABC called " In the Beginning ," and I don't know if I'll be able to see it.  It strikes me as one of those sensationalistic shows that will annoy scholars, skeptics, and believers alike.  So I'm not recommending it, but I would be curious to hear from anyone who happens to watch it. Also, I wanted to remind everyone that the deadline for submitting to the JCTSB special issue on Symbiosis and Relationship is coming up on January 31.   Read all about it at the Creation Biology Society website .  I was not going to submit a paper for that issue, but I thought of one that would be good, so I'm scrambling to get it done in time.  I hope we'll get a good turnout for that issue, so if you have a paper in progress, d
Read more

Getting rid of bad mutations 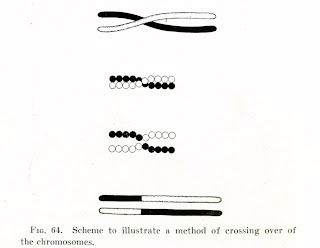 There's this really cool new paper in PNAS that I'm not sure will be celebrated to the extent it should be.  To explain why it's so awesomely cool, I have to explain a little about the fascinating topic of recombination. As you may already know, most multicellular organisms (like me or my cat or the trees in my yard) have multiple sets of chromosomes.  I have two sets of chromosomes, 22 regular chromosomes from each parent, an X chromosome from my mom, and a Y chromosome from my dad.  That means I have two copies of each gene (except the ones on the X & Y chromosomes), which is really handy in case one of those copies is broken and doesn't work right.  I've got a spare that hopefully will.  I've heard of studies that estimate that we all carry around a small number of lethal mutations on our chromosomes, but it's not a problem because we've got an extra copy of the same gene that works just fine. When those chromosomes are passed along to offsp
Read more

A surprising opinion on education and Bryan College

December 18, 2012
My wife found this short article in the Bryan archives the other day.  It's a very enlightened opinion, if I do say so myself.  It's a far more realistic understanding of east Tennessee than the bigotry of Mencken. Chattanooga News March 16, 1927 Says Evolutionists Should Support Bryan Memorial University Dayton, Tenn. March 16th - Henry E. Colton, Nashville lawyer and one of the defense attorneys in the Scopes case following which WJB died here, says evolutionists should support the Bryan Memorial Univeristy at Dayton in spite of its expressed anti-evolution principles. "Education," says Mr. Colton, "is more important than any one of its elements or subjects." With his letter to the Bryan Memorial University Association here expressing this view, Mr. Colton enclosed a check for $100.00 which is the popular subscription unit in the campaign for the university. To quote briefly from the letter: "Those who believe in the teaching of evolution s
Read more

December 17, 2012
It's time once again for me to take stock of my recent research progress.  Looking back over the last year's blog posts, it seems I haven't done this in some time.  Consider this a sort of annual report then. This was an unusually busy year.  I submitted twelve research articles for publication.  Two of those articles have already been published in JCTSB  ( here and here ), and two more have been accepted for publication.  Two were rejected, one of which was kind of a longshot anyway (not really a finished study).  The other rejection was my latest response to Senter , which was a lot of work.  That manuscript was turned down by six different journals, and every one of them was an editorial decision that the paper was just not appropriate for their journal, which I can't really argue with.  That leaves six more papers still in editing, and I'm hopeful that they will make it into print somewhere, since they're mostly not controversial. As for my current proj
Read more

December 06, 2012
That's kind of a goofy title, but I was originally going to call this post "Non-tribosphenic mammal found in Miocene of South America!"  But I don't think that would entice anyone to read it, which is a shame.  So I went with the more explanatory title, which I guess worked, because you're reading it. What's it all about?  Let's start with the Mesozoic.  In terms of conventional science, the Mesozoic is the age of dinosaurs.  It starts about 250 million years ago and ends about 65 million years ago.  The big Mesozoic land animals were dinosaurs, but there were some odd-looking birds and mammals too.  The mammals in particular were really strange, well outside the classification of any modern mammals. For example, modern mammal groups all have tribosphenic teeth , molars with three cusps.  In the Mesozoic, however, there are mammals without tribosphenic teeth, which means they're unlike any mammal alive today.  From an evolutionary perspective, thes
Read more

December 05, 2012
I've been reading a lot of church fathers in preparation for my Sunday School class  (which is actually taking quite a bit longer than I originally anticipated), and I've been impressed with how many of them read Genesis 1-11 as historically valid.  Especially when treating the Genesis narratives apologetically, the fathers tended to defend the straight historical sense of the passages.  With that recent background, I was very interested in Jack Collins's most recent paper  "Noah, Deucalion, and the New Testament," in which he surveys various early treatments of the Greek legends of a Noah-like figure called Deucalion who survived a flood much like Noah did.  In both Jewish and Christian sources, he notes a tendency to use terminology from pagan flood legends when discussing Noah and the ark, and in some cases, the writers explicitly state that either Noah is the same person as Deucalion or that the Genesis account is the correct version of the Greek legend.  Once
Read more
More posts