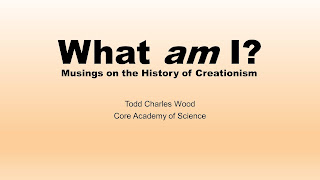 For my plenary at this year's Origins conference, I was inspired by Joel Duff's paper Dissent with modification: how postcreationism’s claim of hyperrapid speciation opposes yet embraces evolutionary theory, which was recently published in Evolution Education & Outreach.  In my circles it made kind of a splash, and there have already been rebuttals posted and other rebuttals are being composed.  And there's plenty to be mad about I suppose, mostly because I don't recognize myself in this paper at all.
But I was inspired mostly by the name "postcreationist," because it first made me laugh but it also made me start thinking.  How do modern creationists relate to their forebears of recent memory?  I recall meeting Henry Morris and Duane Gish, but my take on creationism is definitely a bit different from theirs.  As I thought about it, I realized my generation grew up after all the disputes of the early twentieth century.  I never gave day-age creationism or gap theory creationism a second thought.  That freed me up to attend to other matters like created kinds or hominin fossils.
Lest I spoil the whole talk, here it is:
Joel sent me an email after he heard my talk, but I'll let him respond if he wants.  I'm not sure that email was intended for public consumption, and I wouldn't want to post it without permission.
Now just in case you're dubious and think I made all that stuff up, you can check out some of my sources right here.  None of this is new; I just put the pieces together in a cute, new way.
D.C. Lindberg and R.L. Numbers, 1986, God & Nature: Historical Essays on the Encounter between Christianity and Science.  University of California Press, Berkeley.
M.J.S. Rudwick, 1976, The Meaning of Fossils: Episodes in the History of Palaeontology.  Science History Publications, New York.
R.L. Numbers, 2006, The Creationists.  Harvard University Press, Cambridge, MA.
E.J. Larson, 2003, Trial and Error: The American Controversy over Creation and Evolution.  Oxford University Press, Oxford.
T.C. Wood, 2008, “Species Variability and Creationism,” Origins 62:6-25. https://www.grisda.org/origins-62006
R. O’Connor, 2007, “Young-Earth Creationists in Early Nineteenth-Century Britain? Towards a Reassessment of ‘Scriptural Geology,’” History of Science 45:357-403.
W.H. Johns, 2016, “Scriptural geology then and now,” Answers Research Journal 9:317-337. https://assets.answersingenesis.org/doc/articles/pdf-versions/arj/v9/scriptural_geology.pdf
E.J. Larson, 2006, Summer for the Gods: The Scopes Trial and America's Continuing Debate Over Science and Religion.  Basic Books.
P.J. Bowler, 1983, The Eclipse of Darwinism: Anti-Darwinian Evolution Theories in the Decades around 1900.  Johns Hopkins University Press, Baltimore.
J.H. Roberts, 1988, Darwinism and the Divine in America: Protestant Intellectuals and Organic Evolution, 1859-1900.  University of Notre Dame Press, Notre Dame, IN.
F.J. Cole, 1975, A History of Comparative Anatomy: From Aristotle to the Eighteenth Century.  Dover Publications, New York.
T.S. Kuhn, 1970, The Structure of Scientific Revolutions.  University of Chicago Press, Chicago.
Feedback? Email me at toddcharleswood [at] gmail [dot] com. If you enjoyed this article, please consider a contribution to Core Academy of Science. Thank you.
Have you read my book?  You should check that out too!