YOU'RE BEING LIED TO: THE TRUTH ABOUT THE PANDEMIC

Did I get your attention?  Excellent.  Some of you have been asking me about my thoughts on the pandemic.  Well, I'm sorry I haven't been able to get back to you as quickly as you might have liked, but here's what I think.

I spent Thursday morning recording the final lessons of the year for my high school students.  For the past four years, I've been teaching Bible part time to students at Rhea County Academy, our local Christian school.  Distance learning was not the way I wanted to end these classes, but God had other plans for us.

Wrapping up New Testament, I taught how early Christian heresies contrast with the sacred writings that would become our New Testament, and while I was teaching, I had a kind of epiphany.  You see, the Gnostics believed that salvation came through enlightenment and special knowledge (the Greek for knowledge is gnosis).  They believed that our physical reality is actually evil, and only the spirit world was good.  To be "saved" is to be enlightened to this truth: Reality is not what it seems.  Those who don't know this are doomed.

Gone from the Gnostic thinking was any sense of personal sin, of Jesus' dying on the cross for my sins, of repentance, and of living a life of self-sacrifice for others.  Gnosticism is all about you.  Enlightenment makes you feel good.  It appeals to our pride.  It makes people look down on the unenlightened.  Christianity draws us out of this selfishness (or at least it should) to orient ourselves to love God and love neighbor.

As I described this to a camera in an empty room, I was struck at how similar gnosticism was to various conspiracy theories going around about the current pandemic.  Reality is not what it seems, we're told.  To achieve salvation, we must accept this special knowledge and see that we're being lied to.  Enlightenment not only can save us, it makes us feel so much smarter than those "sheeple" who just accept what the government tells them.

Like many other Christian biologists, I find these conspiracy theories nonsensical, but like Gnosticism, they appeal to our pride.  Conspiracy theories feed on ego: We think, "I'm not going to be taken in by the 'experts' who just swallow the latest government lies.  I'm way smarter than that!  If only other people could just be enlightened like I am!"

One thing that I agree with the conspiracy theories about: You are definitely being lied to ... by the individuals trying to sell you on conspiracy theories.
Here's what I know about this outbreak.  Everything about it is a classic, natural viral outbreak.  I've seen absolutely nothing out of the ordinary.  The concern that prompted the drastic social distancing was the rapid rate at which this virus spread, combined with early estimates of a fatality rate about ten times higher than the flu.  Have we learned more and revised those estimates?  Of course we have, that's what science does.  We learn new things and revise our models.  It's not the sign of a scam.

Why do we social distance?  Because research has shown that it works to slow the spread of the virus, which prevents hospitals from being overloaded, which means more people get effective treatment and survive.  Don't believe me?  Here's the paper that convinced me that social distancing, quarantines, and lockdowns work.  "Flattening the curve" is not a cliche or a buzzword.  It saved people's lives in 1918, and it's saving people's lives now.

Is COVID-19 really no worse than a bad outbreak of the flu?  It's far worse, or at least it has the potential to be.  The flu has been around for years, and there's a lot of resistance already in the population.  Plus, the flu does not spread nearly as fast as COVID-19, and there are preventatives (flu shot) and effective treatments available for the flu.  COVID-19 is new, we are unprepared, and lots of people are dying from it.  So far, more than a quarter million people have died from COVID-19.  This isn't just a minor outbreak.

Does that mean that this will be a bad as projected and therefore the shutdown is completely justified?  Like I've said before, I'm glad I don't have to make these decisions, but here's what I know for sure:  Social distancing works best when it's implemented before a major outbreak takes place, and it only works when you get a large majority of the population participating.  When it works, it flattens the curve, making the shutdown look like an overreaction. 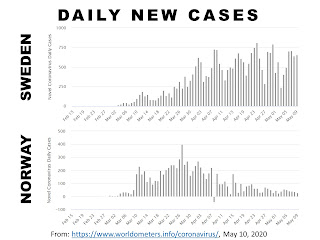 Remember: Sweden did not enact strict social distancing measures, but Norway did.  Notice the new cases in Norway are dropping off gradually, while Sweden seems to have leveled off for who knows how long.  The fatality rates are similarly different.  Sweden's deaths/million are 319.  Norway's deaths/million are 40.  There are about 8x as many people dying in Sweden as in Norway, when corrected for population.  That's hugely significant.  Now I'm not so naive to assume that this is a one-dimensional effect of social distancing, because this is far more complicated than just that.  Then again, maybe it isn't.  Either way, given the choice between the two, I'd much rather live in Norway right now.

At the same time, I'm also very sympathetic to the damage this is doing to people's jobs and businesses.  My first thought when Ohio announced its lockdown way back in March was that we were trying to protect one vulnerable population (the elderly) by endangering another vulnerable population (those who live paycheck to paycheck).  Even with the limited and constantly changing information we have, I still think that everyone is doing the best they know how to protect their citizens.  This isn't a conspiracy to take away your rights or freedoms.

But it is agony to sit and wait and know that a lot of small businesses will basically have to start almost from scratch once this is done.  It hits me too.  Core Academy is donor-driven, and its ministry is built on personal meetings.  As we've canceled all our activities for the foreseeable future, the ministry's income has taken a hit, and we've had to change our financial goals for the year.  I'm eager for things to get back to normal.  But I also know that this is a dangerous time for a lot of people, and I need to pray to the Lord to preserve us and to help our world recover from every dimension of pain that this pandemic has caused.

Now, you may think that I'm a "sheeple" and that I've "drunk the kool-aid" and don't know what I'm talking about.  OK, well I'm not the only one who thinks these conspiracy theories are insane and dangerous.  Here's Dr. Rob Carter from Creation Ministries International.  Like me, he's a young-earth creationist and has a background in molecular biology.  He's a dyed-in-the-wool, conservative scholar, much like me.  What does he think?

Still not convinced?  Here's the take of Dr. Andrew Fabich of Truett-McConnell University.  He's also a young-age creationist, and he's got a background in microbiology.  This is what he posted in a comment on Facebook:


I couldn’t watch the full video: it got that bad. My initial concerns were based on looking up the lady in the equivalent of Google for scientific journals and she didn’t have any papers about HIV on her first page of results. Admittedly, I don’t know the full story about Fauci’s hand in the HIV narrative, but I agree with her assessment that he isn’t trustworthy. I strongly disagree with her attack of Birx (who I dislike as much as Fauci) because most people are unaware that defining COVID-19 deaths like this is precisely the way it happened for the 1918 influenza (people weren’t actually dying from influenza, but a secondary pneumonia the influenza set up). And when this video began showing all the “doctors” disagreeing with the establishment, I noticed one video in particular that is a guy whose YouTube video says he’s a doctor and then verbally states in the video that he’s a respiratory therapist.  Source: Facebook

"I couldn't watch the full video: it got that bad." - Dr. Andrew Fabich

Still think we're all not really experts?  What do we know?  OK, how about a Christian who's actually studied viruses?  Dr. Jennifer Gruenke started a blog about all this to help spread good information about the COVID-19 crisis.  Here's her assessment of conspiracy theories:


I get the impression that the idea behind these conspiracy theories is that if something bad happens, it can't be due to nature, it must be human agency -- the natural is safe and the artificial is dangerous. But this belief is deeply at odds with the biology. Nature wants to eat you.  Source: Don't believe the covid conspiracy theories

"Nature wants to eat you."  She's right.  It really does.

Maybe you're convinced that the conspiracy theories really are dangerous nonsense.  What should you do if you don't want to spread misinformation about the pandemic, but you're not sure about something you've seen or read?  Very simple: Don't.  If you're not sure about something, don't spread it.  In fact, just don't post anything about the virus at all.  You can't spread misinformation if you're not spreading anything.  Simple as that.

On the other hand, you might still be thinking that you just have a different opinion about the "conspiracy" and that I'm naughty because I don't respect your opinion.  Well, that's also erroneous.  I do not respect falsehoods, especially falsehoods that have the potential to endanger people's lives.  But I've also learned from my time with Darrel Falk that Christians can deeply and passionately disagree about very important things and still enjoy fellowship and the unity of Christ.  So I'll turn that question back to you:  Will you respect me personally despite my informed and knowledgeable expert opinion that you disagree with?  Or will you go full Gnostic, and decide that your "enlightenment" makes you better than me?

I guess the choice is yours.

But I won't stop reminding people that they're being lied to by conspiracy crackpots who want to use your anger at the government to fuel discontent.  Lives are at stake.