Well, that was a popular post.  My previous essay was viewed more than 5,500 times, and the feedback has been mostly (and cautiously) positive.  But my social media feed still encourages me to "wake up" and see what's "really going on."

There were a few questions and criticisms, which I thought were worth talking about.

Yes, those in charge of these decisions ought do this.  And remember that it's not just the economically threatened people in danger but others as well.  Domestic violence, mental illness and suicide, and even the willingness to seek basic emergency healthcare will be impacted by the shutdown.  Our situation does not reduce to "lives threatened by the virus vs. being inconvenienced at home for a few weeks."  Nor is it "horrendous, life-threatening economic disaster vs. a harmless flu bug."  It really is lives vs. lives.  No question about that.

What should we do about this?  Maybe pray for mercy.  We're in a classic no-win scenario here.  No matter what we do, people will be hurt, and some will die.  Those politicians making the decisions will be blamed for either over-reacting or not reacting enough.  So they don't have the answer, and I don't either.  I don't think anyone can realistically project the cost in lives or money if we do this or that.  It's true that we have a lot of models and projections, but reality is so much more complicated than that.

To those who want to just go about our business, tough it out with the disease, and get to herd immunity as quickly as possible, well, that means lots of people will die.  And to those who want to shut everything down indefinitely or until we have a vaccine or effective treatment, different people will die.  Seems to me there's got to be a balance point that actually minimizes the loss of life, and I have no idea where it is or how to find it.  But I'm pretty sure that doing nothing or locking down everything are not the way.

Don't you think people are underestimating the economic damage?

I have no way to know, but my suspicion is that everything right now is being under/over estimated by the people making these decisions.  It's a very difficult and complicated situation, and it's changing every day.  We're constantly learning new things, revising models, etc.  I'm sorry if that's not satisfying, but there it is.

In the end, I think this whole thing will be devastating to those who have unexpectedly lost family members to the virus as well as those who have lost a lifetime of investment in a business.  But generally, I suspect neither the virus nor the shutdown will be as devastating on the whole as the worst-case forecasts.

With regard to specific questions about why this or that is happening, no, I'm not going to conjecture or speculate.  I just don't know.  I'm not an epidemiologist, and this situation is constantly changing.

With regard to my gullibility about accepting the statistics, well, that's what we do in science.  You take the data you have, you report it, and then you frown and wonder if you have the right answer.  Constant skepticism and questioning drive science forward.  I'm sorry if that didn't come across well enough, because scientists don't obsess over it.  It's a given.

For those who just assume that everyone is lying about the case load to get money from the government or some such reason, I reject that out of hand.  That's not skepticism.  That's cynicism, and it's immensely disrespectful to the thousands who have died from this virus.

I have no doubt there are discrepancies due to differences in reporting, testing, etc.  I definitely don't trust the numbers coming out of China (based on those numbers, I expected to be back to school in mid-April).  How much does this impact projections and decisions?  I don't know.

Even with the screwy data, I think there are some statistics that are worth thinking about.  Here is the current daily new cases in the US from Worldometers: 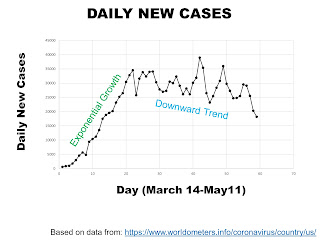 But the most important part of this graph to me is the end of the exponential growth.  That suggests (suggests only) that the virus is not going to spread as far as the worst-case scenarios expected.  Maybe.  So that's at least a little good news.

What should we Christians do?

Love your neighbor.  Who is your neighbor?  The person in need.  Maybe that person needs some socializing.  My wife and I have enjoyed showing up to people's yards and interacting from a distance.  (We did get the cops called on us one time by a jittery neighbor though.  Don't do that.)  Maybe that person needs some business.  I got takeout last night from a locally owned restaurant.  The man working their told me he was sure this would soon be over.  Then he assured me, "We love you.  We love you."  I gave him a big, unnecessary tip.  Other people have poured themselves into providing things for their local hospitals.  I've seen people sewing face masks and using 3D printers to manufacture other items.  Maybe you just need to drop off a few anonymous grocery store gift cards in mailboxes.  Find a way to help those around you.

Next, lament.  The lament is the most common form of the Psalms.  Job complained for chapter after chapter, and God said that he spoke the truth.  And yet, when was the last time you prayed, "God, why are you doing this to us?  Don't you care about your children?  We're suffering.  We're dying.  Do something!"  It sounds so impious and disrespectful and faithless, but it's straight out of the Bible.  Lament and grieve and cry out for mercy.  Don't pull any punches.  God already knows how angry you are.  You might as well be honest.

In the midst of your lament, I hope you will find hope and comfort knowing that God has not forgotten you.  If there's a theme to the most strident voices crying "SCAM," it's fear.  They're afraid of sinister forces moving behind the scenes instead of a virus moving front and center.  They're afraid that the "cure" is worse than the disease.  They complain about the "panic," but they're afraid too.  They're just afraid of something different.  Lament should bring your focus off whatever you fear and things you can't change and put that focus back on the one who can actually change things.  Maybe you'll even find that the one who can change things really does care about your suffering.

A couple weeks back, I finished teaching Revelation to my high school students.  You know what happens in the end?  Jesus wins.  No virus or scam or conspiracy is going to change that.  Right now, this stinks.  Shutdowns, viruses, fear, and death abound.  We're probably going to suffer even more before the end.  But Revelation tells us that the key to understanding its prophecy is obedience: "Blessed are those who hear, and who keep what is written in it" (Rev. 1:3).  What's the command of Revelation?  Overcome.  Persist.  Persevere.  Don't give up, even when the whole world turns against you, because Jesus is waiting for you.

Lament and grieve, but don't give way to fear.  God has not forgotten you.  He holds you in his hand.  No one can snatch you from it.