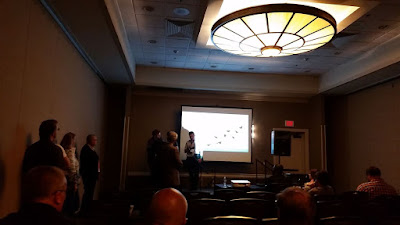 My Monday began with three talks that I would have liked to hear, but I couldn't because I was scheduled to give one at the same time.  So I'll just have to read about the Precambrian model, the Septuagint chronology, and the long-running Coconino project.  Concurrent sessions at ICC are really not ideal when there are so few of us and we all have wide-ranging interests.  I know ICC has done it this way for years, but we could easily shorten the sessions, have more talks per day, and still have fewer tracks.  Four tracks are too much.  Just a thought.

My morning presentation was given by one of our student interns, and the subject was Cenozoic mammals.  We've gotten to the point in paleontology where a lot more people are trying to do phylogenies of their favorite groups, and consequently, there are a lot more character matrices available in the literature.  So we put together a massive survey of mammalian families to figure out if our statistical baraminology methods would detect discontinuity around them.  We looked at 82 different groups and found evidence of discontinuity in 57 of them.  That's a 2:1 ratio, and that's great.  But we still couldn't determine why the other matrices didn't yield evidence of discontinuity.  Statistically, they appear to be the same as matrices that do yield evidence of discontinuity.  So we still have lots of work to do there.

The last talk of the day was Joe Francis's presentation on bacteriophages as genetic regulators, which I was also a co-author on.  This is work that we've talked about for years as we've pondered the importance of the microbial world for an understanding of creation.  Joe talked about how phages can modulate bacterial activity specifically within the normal mammalian microflora.  It's an interesting paper that adds to our comprehension of microbial design.

Seems like there was one other paper from Monday....  Oh yes, the notorious feathered dinosaur presentation from the new CBS president Matt McLain and his co-conspirators (the three Matt-ateers?).  In my view, this was the least controversial paper of the day.  There appear to be multiple created kinds of dinosaurs with feathers.  Coulson's talk was way, WAY more controversial than this one, but feathered dinos generated a lot more heat and friction than Cambrian stromatolites.  I guess people like dinosaurs, and nobody cares about stromatolites.

I've already addressed one question from the Q&A, when I got all hot and bothered sitting there during the conference.  Another suggestion was to avoid using the term "feathered dinosaur," and call them something else.  I don't have a clue why we would want to do that.  Seriously.  They're dinosaurs, and they have feathers.  That makes them feathered dinosaurs.  You could call them plumaceous terrible lizards or quilled theropods, but they would still be feathered dinosaurs.

Then there was one person who really got upset.  Maybe upset isn't the right word.  She was very strident and somewhat loud.  No actual yelling, but her voice was definitely raised.  She mostly insisted that they hadn't done anything to show that there were actual feathers on dinosaurs, and before we can conclude there are feathers on dinosaurs we have to do the anatomical studies.  I thought that was entirely unnecessary.  Feathered dinosaurs have been around a long time, and there are literally thousands of research papers on feathered dinosaurs and dinosaur feathers.  If you don't believe those, go down to the Carnegie Museum and see them for yourself:


I don't think there's any more that creationists can add to the question of whether dinosaurs had feathers.  They did.  Get over it.  The cool but entirely expected part of the feathered dinosaur talk (that everyone ignores) is the multiple baramins of feathered dinosaurs.  No surprise there, and completely consistent with a creationist perspective.  Birds share a lot of anatomical features with some dinos, but it appears to be a design feature rather than an evolutionary connection.  This is consistent with my paper from last ICC, where we found ample evidence of discontinuity between feathered dinosaurs and true birds.

Read all the articles for free in the ICC proceedings:

Coulson. 2018. Global deposits of in situ upper Cambrian microbialites—Implications for a cohesive model of origins. ICC 8:373-388.

Francis, Ingle, and Wood. 2018. Bacteriophages as beneficial regulators of the mammalian microbiome. ICC 8:152-157.