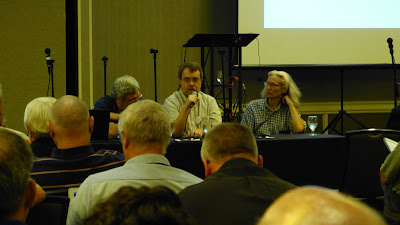 Today at the ICC, we had a panel discussion on created kinds with Kurt Wise, Jean Lightner, and me.  It went really well, and I really, really enjoyed all the good questions from the audience.  Thankfully, the panel's moderator required all questions to be submitted on paper, and after the panel was over, I pocketed the stack of unanswered questions.  So here are my answers.

Question: Is the current baraminological understanding consistent with the Levitical Laws?  I wonder, if, as Prof. K. Wise said, baraminology has the potential to offer a window into the way God thinks in the prescribed Mosaic laws.

Interesting question.  I'm not sure what the answer would be.  My crude suspicion is that there isn't much direct correlation yet, partly because we haven't focused too carefully on the animals mentioned there and partly because we don't always know what animals those Hebrew words refer to.

It's also an interesting question when thinking about Noah taking clean and unclean animals onto the ark.  Presumably certain created kinds are "clean," but I don't think we know yet exactly how those baramins relate to (for example) modern bovids.

Question: Please specify how different you think Adam's morphology could have been.  Two eyes, for example?  Or not necessarily?

Two eyes for sure.  When I think about Adam's appearance, I think a bit more conservatively about what (we think) we know about human diversity.  For example, we know today that most of the variation in human skin tone is due to mutations in one gene called MC1R.  Because we know the biochemical function of MC1R, we know that the normally functioning version produces a moderately brown skin color, perhaps like former President Obama's.  White people are mutants.  So Adam was definitely not white.

Likewise, when I look at the diversity of fossil humans, I see that chins and high foreheads appear to be rare in human diversity.  So I wonder if these features might be recent developments.  But I don't know.  There is much we don't know for sure about fossil humans.

Question: What is the name of the fossil that shows a whale with feet?  A discussion is fine, but isn't stretching ideas beyond what is shown dangerous?

There are many whale fossils with varying sizes of hind feet, including Ambulocetus, Rodhocetus, and Dorudon.  These are not modern-type toothed or baleen whales, however.  They're classified as Archaeoceti, and my research has shown that they are not the same created kind as the modern whales.

Dr. Wise thinks we should keep an open mind, though, because it's at least conceivable that all whales descend from a common ancestor.  That would certainly explain the toothed baleen whales (no, I'm not kidding).  My research so far does not support that, but things could change.

Is this dangerous?  No.  It's not.  What's dangerous is not talking about these hard problems or pretending like they're easily solved.

Question: Does reproductive isolation, or any other species concept, still correlate with the original created kinds?

Maybe.  Creationists have long assumed that created kinds are reproductively isolated and that any species that could hybridize are members of the same created kind.  There are still some who think that any animals that hybridize must be of the same species, but that is erroneous.  Species are not the same as created kinds, and species are not reproductively isolated to an exact degree.  Hybridization and introgression are well known phenomena in ecology and evolutionary biology.

Question: What is the secular equivalent, order, family, genus?

I presume you're asking about the created kind, and the answer is that there isn't a simple equivalency.  Often in the mammals, I've found "family" works pretty well, but in some groups it's subfamily and in others it's a superfamily or even higher.  In humans, it doesn't really have an equivalent rank.  In insects or plants, it's way too early to say for sure.

Oh heavens no.  Baramins need to be defined by holistic analyses.  One segment of one mtDNA gene isn't going to cut it.  I suppose you could use mtDNA as a supplement, but it's not anything that could define a created kind.

Question: How about sequences of common proteins as a basis of baraminology?

Question: The Bible specifically says that the plants and animals were to "reproduce after their kind."  How is reproduction included in the determination of what is included in a kind?

Well, that's false.  The Bible absolutely does NOT say that plants and animals were to "reproduce after their kind."  Look up Genesis 1 and read it again.  That statement is not there.  That's just a myth perpetuated by creationist folk wisdom.  It is not scriptural.

Still, creationists have long thought that hybridization was a good indicator that the parent species belonged to the same created kind.  That is another one of those methods that I would like to see used as a supplement to the other methods, and it has been.  The cat family Felidae and the dog family Canidae have both been analyzed using statistical methods and hybridization.

Question: Why are the statistical analyses of phylogenetic systematics not considered reliable for identifying kinds?

The simplest answer is that modern phylogenetic methods are designed to produce a single tree.  They are not designed to determined if a tree is the best way to represent the data.  Now, you could certainly use phylogenetic methods to experiment with different forms of trees and look at the various measures of goodness of fit, but that's a little more complicated than just "using" phylogenetics.

You also couldn't tell if the tree was the best way to represent the similarities of multiple baramins, which is a really interesting question.  I'm not at all convinced that the tree is the best representation.  I suspect the real pattern will be more complicated than just a single tree.

Question: What is the ultimate goal of baraminology science?

To glorify God and enjoy him forever.  Also to know the creator better.