A long time ago (2005 to be quite specific), Kurt Wise wrote an article wherein he argued for the full humanity of the recently-discovered "Hobbit" fossils in part because it was a seafarer.  Let's unpack what that means.  The famous "Hobbit" fossils were discovered on the island of Flores in Indonesia in a cave called Liang Bua.  The remains had similarities to Homo erectus from the nearby island of Java, and recent attempts to date the fossils by conventional means put their age at 60,000-100,000 years old, with associated stone tools possibly as old as 190,000 years.  The exciting part is the location: Flores is an island that was never attached to the mainland.  Even in the past when sea levels were different, many islands of Indonesia were connected, but Flores remained isolated.  In this map, the light colors represent previously existing land masses when the sea levels were at their lowest.

Regardless of whether you're a creationist or evolutionist, everybody agrees that hominins and humans would have originated on the Asian mainland and must have moved south and east to leave fossils and stone tools on Flores.  Since Flores was always separated from the nearest island to the west by at least 11 miles, Wise concluded that these Hobbits were probably not just washed there in a storm.  He thought they intentionally went to that island in some kind of boat.  Put it together with the remains of stone tools, animal butchering, and controlled use of fire, and you have a creature that behaves awfully similar to a human being.  And I agree.  Homo floresiensis, or the "Hobbit" if you prefer, was a human descendant of Adam and Eve.

A new article from Science now highlights evidence of similar seafaring behavior in Neandertals.  Stone tools recently discovered in the Greek isles and Crete resemble those associated with Neandertals and Homo erectus.  These stone tools could similar in conventional age to the Hobbit remains from Flores, and some might even be much, much older.  Maybe.  The scientists involved are being cautious and skeptical with their conclusions (as they should), but the pattern of stone tools across these islands certainly paints a picture of seafaring "cavemen."  This isn't one of those instances where one site provides the irrefutable "proof" of Neandertal boating, but when you consider the sites together as a whole, it sure does look like ancient humans were intentionally crossing big bodies of water. 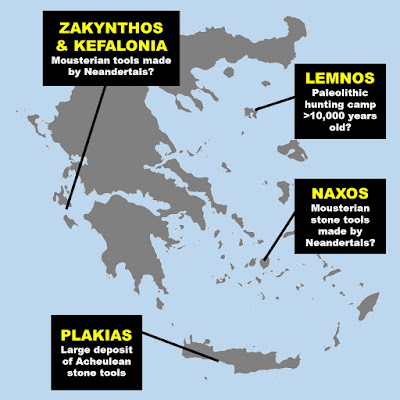 It will take a while before everyone is convinced, and in the mean time, those creationists who deny the humanity of Neandertals and Homo erectus will continue to ignore or denigrate this evidence.  But I wouldn't be surprised if "seafaring" becomes a description of Neandertals in anthropology textbooks of 2050.

What does this mean for Flores?  I think they go hand in hand.  Neandertals were probably boating around ancient Europe, and I see no reason to doubt other humans were boating around ancient Indonesia.  The Science article endorses doubt on the dispersion across Indonesia, though, which strikes me as oddly inconsistent.  With ancient Homo sapiens crossing into Australia as well as the Flores fossils, there's at least as much evidence in the south sea for ancient seafaring as there is in the Mediterranean.  Maybe people will start noticing that too.

As a creationist, none of this is particular shocking.  I expect the descendants of Noah, including Neandertals and Hobbits, to have some memory and knowledge of seafaring.  I just wonder what took us so long to make these discoveries?  No one ever thought to look in the "unlikeliest" of places?  Well, maybe we should look again.  Who knows what surprises await us right under our noses?