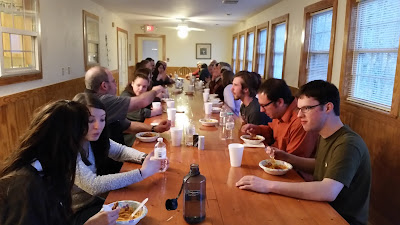 It's been a busy month.  Most of my time has been consumed with production on biology lessons for Schoolhouseteachers.com, and that's meant too many 13-hour days trying to get everything done.  The good news is that I've reached the end of that work.  I'll be putting the finishing touches on our final biology lessons this week!  Through that outreach, Core Academy reaches 6,000 families!  So it's definitely worth the long hours.

We also had our third Smoky Mountain Creation Retreat, and it was the biggest one yet.  We sold out for the first time ever, and we had nine students this year.  As usual, everyone stayed up way too late talking, which is kind of the point.  On Saturday, a bunch of folks went off hiking, while the rest of us just relaxed.  It was a great weekend!  I definitely want to thank all the donors to Core Academy who make this retreat possible every year.

Meanwhile, the world is still waiting for the details on the surprisingly recent date for Homo naledi and the revelation of the remains from Chamber 102.  I have no idea what's going on.  Probably editorial stuff.  Based on an article from The South African, I thought the big announcement was coming March 18, which admittedly seemed odd since it was a Saturday, but that didn't happen.  The book release for Berger's Almost Human has been pushed back again to May 9.  I did notice this morning that the American Association of Physical Anthropologists are meeting in New Orleans on the weekend of April 21, so if I had to guess, I'd say that will be the unveiling.

In other interesting science news, the age of the Little Foot skeleton has been questioned again.  Little Foot is the most complete and pristine australopith fossil ever discovered, and Ron Clarke has been working on it for nearly 20 years now.  It was found in a cave deposit in the Silberberg Grotto in Sterkfontein (literally around the corner from where Homo naledi was discovered).  Previously, researchers suggested a date of 3.67 million years, but this new paper argues that it's actually younger than 2.8 million years.  Who's right?  Honestly, the site sounds like it has a hugely complicated deposition, and it's way above this biochemist's pitifully small geology understanding.  I am fairly sure, though, that we haven't heard the last of the 3.67 million year date.

Also, genomic DNA sequences from the Wrangel Island mammoths have been published, and they're fantastic.  Wrangel Island is a Siberian island where a population of mammoths until surprisingly recently.  The most recent fossils from Wrangel Island date to 2000 BC by carbon dating.  The mammoths there were also dwarfs, and the isolation of this population on an island gives us an opportunity to study the effects of small population size on genomes.  What the researchers found was a surprisingly large number of loss-of-function mutations.  This confirms the basic idea that natural selection is less effective in smaller populations.