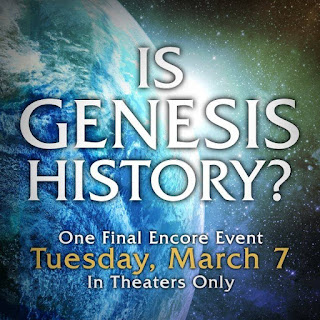 Is Genesis History? has been shown twice now, and I've been casually following reactions, mostly on social media. I've been alternately sympathetic to and dumbfounded by the negative reactions.  In this post, I want to deal with one major recurring theme, which, as you've already guessed, is the false dichotomy.

The day the movie opened, Paul Nelson, one of the experts in the film, posted a dissent from the film on the day it opened, and I got some emails asking me what's going on. Paul's concerned about what he sees as a "false dichotomy" between historical Genesis and the "conventional view," which he described in the movie as "all the complexity of life [constructed] by strictly physical processes" (his quote).  According to Paul, it's possible to question the historicity of certain parts or interpretations of Genesis and still believe that God had to intervene to create life or major groups of creatures.  The dichotomy as he described it in the movie isn't fair to Christians who take an old-earth view or who hold to some kind of intelligent intervention during evolution.

BioLogos also posted a passionate rejection of the movie from a geological perspective, with a three person by-line of Gregg Davidson, Joel Duff, and Ken Wolgemuth. They decried the same thing:


A false dichotomy is created from the very first words by giving the viewer the impression that the world is divided between those who believe Genesis is history and those who believe it is merely a collection of myths.

Jeff Zweerink at the old-earth creationist ministry RTB says much the same, but he adds a nice little conclusion:


... the false dichotomy presented in Is Genesis History? creates an unnecessary dividing line in the church, one that is harmful to unity in the body of Christ and hinders our witness.

Then in a baffling turn, he compared the film to a couple Youtube videos advocating a flat earth.  Because, you know, the best way to respond to a "false dichotomy" that lumps old-earth creationists together with atheists is to create a false dichotomy that lumps young-age creationists with flat-earthers.  That'll just cut the dividing line even deeper.

Looking at social media, I saw the same complaints about the "false dichotomy." I even heard from people at church about it. Some people expected an actual evaluation of two views (given the tagline "Two competing views... one compelling truth"), but what they got was a one-sided presentation of young-age creationism.

Does the film present a false dichotomy?  From the world outside of young age creationism, it definitely does.  Lumping all the other positions on creation and evolution into one monumental thing isn't really fair to the vast diversity of opinions out there. That part is quite correct, and if I was an old-earth creationist or theistic evolutionist, I would definitely be bothered by that.

Unfortunately, the reality is that we all divide people up into "us vs. them."  Let's face it, BioLogos would have you divide up the world into BioLogos vs. those who reject all of science.  That's not remotely fair.  Paul Nelson wants the dividing line to separate those who accept design and those who accept only naturalistic processes.  That division would exclude those, like BioLogos, who think the "naturalistic" processes are God's design.  RTB's dividing line isn't so easy to summarize but I guess it would cut off Christians who think the world is young on the one hand and those who think evolution is real on the other.

More importantly, these "us vs. them" dichotomies represent something deeply real to those who present them.  For BioLogos, the idea of rejecting science is a powerful and compelling theme.  Even though I see right through that as a false dichotomy, for them, it's an overwhelming reality.  Likewise for us young-age creationists: Unraveling the history revealed in Genesis 1-11 is at the least very worrisome and at worst a potential road to apostasy (even though young-age creationism is emphatically not a gospel issue).  The theological importance of the historical Genesis is a giant theme of young-age creationism, even if you reject the way some creationists present it.  In the case of RTB or Intelligent Design, the theme seems to be fighting over things that really matter like evolution, and not fighting over things that don't matter like the age of the universe.  If we don't focus our real disagreement on the "most important" issues (like design), then we damage our witness by exaggerating the importance of secondary issues.

It seems to me that we should think more carefully about the genesis of our dichotomous thinking.  I see fear at the root of these dichotomies.  The BioLogos crowd seems to fear slipping into anti-intellectual chaos.  RTB fears majoring on the minors and thereby ruining the effectiveness of their witness.  Young-age creationists fear losing the very identity of Christianity over time.  Behind these fears are genuinely precious things worth valuing: Intellectual honesty and humility, maintaining a good witness and testimony before the world, and the beautiful and rich heritage of Christian theology and exegesis.

All Christians, everyone of us, engage in "us vs. them" thinking.  No exceptions. Until we all acknowledge that and resolve to do better, to find ways to seek and share those common values, there will continue to be these sorts of frustrations.  We all have work to do to elevate this debate to something more edifying and mutually understanding.  We're not there yet. Obviously.

And finally, to those of you patient people who actually read all of this and are still fuming, "That movie was terrible and misleading, and the greater sin is theirs!" you are part of the problem, my friend.  If you play the outrage card (BioLogos), you just add fuel to the fire. The response will be, "BioLogos is the one repeating tired old lies about young-age creationism!"  So please think carefully before you email me your outrage, and maybe direct that energy to thinking about ways of moving forward and not just yelling the same things at our deafened ideological "enemies."  I'd love to hear new ideas.

In another post, I want to talk more about the movie itself, because I think the dichotomy issue is obscuring some important things.  At least from my point of view they're important, but that's a post for another time.