December 08, 2016
For some reason, feathered dinosaurs have become a touchy subject among creationists.  As far as I'm aware, the major creationist organizations still do not accept the existence of feathered dinosaurs.  Either the fossils are not really dinosaurs and have real bird feathers, or the fossils are real dinosaurs but the feathers aren't really feathers, or it's all just a hoax.  There is certainly precedent for being suspicious of feathered dinosaur fossils.  Back in 1999, National Geographic ended up with egg on its face after it put Archaeoraptor on its front cover.  Turns out, Archaeoraptor was a fraud, two different fossils stuck together by shady fossil dealers. 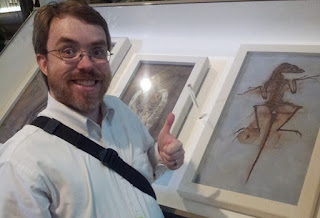 On the other hand, there are many, many other feathered dinosaur fossils that have been discovered since then.  I had the opportunity to see one up close and personal at the Carnegie Museum of Natural History back in 2013.  Now, you can't really see much in a museum exhibit, but it was still pretty cool seeing one in person.  I have no problem whatsoever with feathered dinosaurs.  If God wanted feathered dinosaurs, He could make feathered dinosaurs!

A new paper in Current Biology by Xing and colleagues describes a remarkable new fossil that appears to be a feathered dinosaur.  This fossil is a segment of tail spectacularly preserved in amber, and it was originally discovered in Myanmar.  Here it is:


My first impression was that it was a beautiful fossil, but how do we know it's a dinosaur?  First of all, it's not a bird, at least not a modern bird.  Modern birds don't have long tails like this.  Could it be one of those weird fossil birds with long tails like Archaeopteryx?  The tail bones (visible in scans of the fossil) aren't the right shape, and there seems to be more flexibility to this tail (because it's bent) than to tails of fossil birds with tails.  That means that it's probably a dinosaur of some kind, since they're the only other critters we know of that had feathers like this.  Am I 100% sure it's a dinosaur?  No, nobody is, but it sure does look like one based on what we know about dinosaurs and birds.


And what magnificent feathers they are! The beauty of amber is that we can see amazing details that just aren't preserved well in rocks.  Here you can see a closeup of a few of the feathers, showing that they are definitely feathers.  We can see that they are symmetric, so they're probably not flight feathers.  Flight feathers are asymmetric to make them aerodynamic.  Since dinosaurs didn't fly, symmetric feathers would make sense.  The other thing we can see is that they are loosely connected.  Modern feathers have a central shaft and barbs that branch from that shaft (both of which are visible in this fossil).  In flight feathers, the barbs are connected together with little barbules to give the feather a nice flat surface, but that's not seen here.  The barbs appear to be separate from each other, like a modern downy feather.


Personally, I think this discovery is amazing.  It is completely in line with what we already know about feathered dinosaurs, namely that they had real feathers.  It also doesn't change any of my conclusions from my recent ICC paper, where my colleagues and I concluded that there were important, detectable discontinuities between dinosaurs and birds, even when examining feathered dinosaurs.  In other words, there are many different created kinds (some birds, some feathered dinosaurs) that did not all evolve from a common ancestor.

With that in mind, we should celebrate God's creativity wherever we find it.  I'm sure there will be a few creationists who cast aspersion on this fossil, or call it a fraud, or maybe even call me gullible.  That's OK.  You and I know better.  We can celebrate with the ancient Psalm:


Great are the works of the Lord,
studied by all who delight in them.
Full of splendor and majesty is his work,
and his righteousness endures forever.
He has caused his wondrous works to be remembered;
the Lord is gracious and merciful.
(Ps. 111:2-4)

Fossils are a special way for us to remember the wondrous works of the Lord, just as the Bible says.

Check out the original research paper for all the details; it's open access and completely free to read: