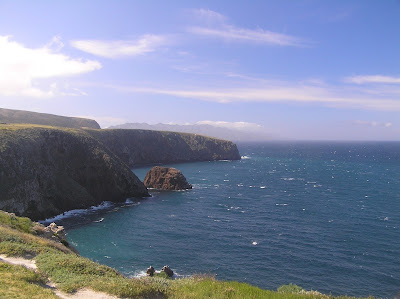 Off the coast of California, the Channel Islands are home to many unique and fascinating creatures.  Dwarf mammoth fossils have been found there, and I previously wrote about the local scrub jays, which is worth reading again:


Next, a recent article in Evolution from Langin et al. details the fascinating discovery of what we might call "speciation in progress" on Santa Cruz island.  Santa Cruz is home to a unique species of jay called the island scrub jay.  They're substantially bigger than mainland scrub jays in nearby California.  The typical explanation for unique island species (ever since Darwin) is that they diverged from their mainland cousins when they were cut off on the island from the mainland.  The isolation of the island is thought to be important to making new species.  If the island and mainland populations were able to mingle, then they presumably would not diverge into different species.  Except, with this research, we find that that doesn't always hold.  On Santa Cruz island (just west of Oxnard, CA), Langin et al. found significant differences in the bill shape of scrub jays inhabiting oak forests and those inhabiting pine forests.  Even though the pine and oak forests are adjacent habitats, Langin et al. still found reduced gene flow between the populations, meaning that oak-inhabiting scrub jays tend to mate with other oak-inhabitors and pine-inhabitors tend to mate with other pine-inhabitors.  This isn't the first evidence of divergence on a single island (For example, see the palms of Lord Howe Island), but it is surprising that something as mobile as a bird would show this pattern of divergence.

This week, I was alerted to a new article in Current Biology that reports on research on another Channel Island species, the island fox (Urocyon littoralis).  The foxes are cat-sized little guys that are active during the day (they're diurnal).  Chances are if you visit the visitor center on Santa Cruz, you'll see one of the foxes lurking around.

The research article by Robinson et al. reports on genome sequencing of seven different island foxes, including two from the distant island of San Nicolas.  Remarkably, where the scrub jays seem to be differentiating into two breeding populations, the foxes exhibit very little genetic difference.  Robinson et al. call it "genomic flatlining."  In particular, the foxes from San Nicolas are nearly identical, with hotspots of variation found in regions associated with the sense of smell (olfactory receptors).

This is fascinating because normally that kind of genetic similarity is associated with an unhealthy population.  As genetic variation goes down, the chances of producing genetically abnormal offspring goes up.  This is called inbreeding depression.  The foxes are considered to be an outbreeding population, and it's surprising to find so little genetic variability without the signs of a declining population.  Somehow these foxes are able to thrive even though the genetics suggest that they shouldn't.

I find this especially interesting since inbreeding depression is a very common counterargument to the Flood.  Supposedly, land creature populations could not survive if they were reduced to a single breeding pair, but here on the Channel Islands, the foxes seem to be contradicting that common wisdom.  Creation is full of surprises.

So the Channel Islands harbor a scrub jay population that seems to be in the process of splitting into different breeding populations (species?) and a fox that is so genetically similar, it probably shouldn't be surviving at all.  According to basic theory in population genetics, neither of those things should be happening. What other secrets do the Channel Islands hold?

Tomorrow, I'm going wrap up Research Week and talk about the future of research at Core Academy.  And don't forget the big announcement coming on Monday!