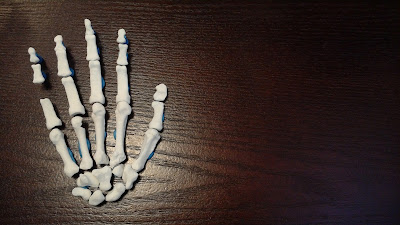 Now that folks have had some time to look over all those Homo naledi papers from JCTSB, I've started getting some feedback.  I thought it would be good to consolidate it all in one blog post.

Over on his blog Naturalis Historia, Joel Duff discussed the papers at length.  He's been pretty critical lately of AIG, to the point of drawing the ire of Ken Ham himself, but he's far less critical of our discussion of Homo naledi.  He still thinks young-age creationism is wrong, but he shows a surprising willingness to engage with creationist ideas.

The comment section is full of interesting ideas and questions.  A user going by the name "wowfunny251" had this to say:


Homo Naledi only presents a problem for YEC’s because of their view on “kinds”. If you allow a “kind” to be narrower, more like a species. It isn’t implausible that God created several species of extinct bipedal primates including Homo Naledi.

That's actually ad hoc.  Instead of trying to interpret fossil evidence (and ecological evidence and genetic evidence and anatomical evidence and biogeographical evidence) that overwhelmingly supports limited speciation, we should just shrug our shoulders and say that "God just made it that way"?  That's not better than a young-age creationist explanation.  It's worse.


Creationists can explain these hominids as special creations or varieties of ape, but there is nothing in the creationist paradigm (“theory” is too generous a word) that would have predicted these discoveries.

That is uncomfortably true, and I've pointed out that very thing before.  On the other hand, I'm not sure that there's anything in evolution that would have predicted Homo naledi.  Evolution certainly would predict the general idea of hominins that possess "primitive" traits of great apes and "derived" traits modern humans, but there isn't much that would guide us in knowing exactly which combination of character traits we should find.  Predicting organismal form is tricky for everyone.


According to Wikipedia, I get the impression that mainstream scientists also have a fairly diverse set of opinions on Homo naledi — it seems that some anthropologists are sceptical of the deliberate burial hypothesis and there are even a few who, like ICR, also doubt that they represent a single species.

I'm not so sure there is much of a diverse set of opinions about Homo naledi.  There are grumps who just seem to hate Lee Berger and will disagree with whatever he says.  Then there are those who find the whole burial idea to be hard to swallow for a variety of reasons, but these skeptics have yet to propose a better explanation of how the bones got into the chamber.  When I attended the Homo naledi symposium at AAPA2016, everyone seemed to be pretty excited to be there.  There weren't any "difficult" people in the audience.  We shouldn't let the press fool us into thinking that there is some massive argument going on over H. naledi.

As for ICR's assertion that there's more than one species in the Homo naledi bones, that is incredibly unlikely.  Here's why:


This exact same scenario played out with the discovery of Au. sediba. Wood claimed it was human, whilst AiG did not. Interestingly, the back and forth over the issue took place within the AiG research journal.  ...  Could this provide the template for the ongoing discussion over H. naledi?


To me this raises the question: do you think there is some sort of analysis Wood could perform they couldn’t dismiss off hand?

No, I do not.  Even if Berger's team found the remains of tools, jewelry, and musical instruments in that cave, a staunch person committed to keeping Homo naledi out of the human family could just say that H. naledi were pets (more about that later).

Moving on, I got an email from a reader who had a really interesting question:


One question for you re. Kurt Wise's excellent paper:
He states with approval 'we need to cease defining humanity on the basis of individual morphological features' and in passing notes 'success in defining the humanity of fossils based upon morphological characters (and even that is questionable)...'
Is this to be understood as a question mark over the status of baraminology - since as far as I understand this is very much relies on morphology since using DNA makes everything too similar? Surely Dr Wise does not mean morphology is totally out of the window otherwise we could say even a fossil cat might be a human. Thoughts?

What does this mean for baraminology?  I've been wondering that from the start.  Should we really expect that morphology will guide us to the created kinds?  Should we be more or less skeptical of quantitative methods like BDC or MDS?  I'm not entirely sure how to answer those questions without more research.  On the one hand, I could be a curmudgeon and say that it's all hogwash (and I'd have good reasons to), or I could be starry eyed and profess my adoration for my infallible created kinds truth detector.  Or maybe I should just proceed with additional research that might validate or invalidate my work.  That's probably the more realistic response.

Over on Triablogue, we find these questions:


is it possible that the floor of the cave is higher than it used to be, due to cumulative debris building up over the intervening time? In other words, was there originally more space between the ceiling and the floor?


What about the possibility of flooding? Would that deposit debris in the back of the cave?

No, there is no evidence of any of that in the Dinaledi chamber.  That point has been emphasized more than once.  These bones did not wash into the back of the cave.


The tacit assumption is that the agents who buried the remains were the same kind of creature as what was buried. However, humans sometimes bury animals.

That's true.  I thought of that myself, but I'm not sure it gets us anything.  As hard as it is to believe someone would crawl that far underground to bury their own child, I'm not sure it's any easier to believe they would do that for a beloved pet.  The only thing it would get you is the ability to affirm the burial hypothesis while saying that Homo naledi isn't human.

That's all for today.  Email if you have a question!