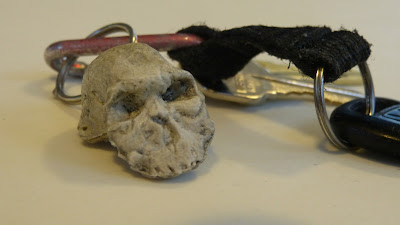 I had some interesting feedback from my comments on the AAPA conference I attended in Atlanta.  Before that, let's admire my cool new key chain that I picked up at the exhibitor booth for the Kenya National Museum.  Yes, the very same Kenya National Museum that put the KNM in KNM-ER 1470!  They had full-sized casts available too, but I was on a budget.  Even though it's tiny, my new skull is pretty neat.

My keychain actually has relevance to one of the more curious comments I got.  One reader enjoyed reading my comments because I didn't sound like an average creationist.  I admit that stung a little (I should sound like a creationist, right?), but it was meant as a compliment.  I wasn't prattling on about evolutionary indoctrination or constantly reassuring my readers that evolution was false or something like that.  In fact, I was probably just as excited to be there as anyone else (hence, the keychain story).

Still, it seems like a creationist ought to have something to say about all this human evolution and fossil and genetics business.  A few thoughts come to mind.  First, it's a lot to take in.  Listening to the standard creationist rhetoric, you might think that "all the evidence supports creation," but the reality is a lot more complicated.  I do believe in the end that it will all make sense within the creationist paradigm, but in the here and now, it's not always obvious how to interpret this or that piece of data.  The story of human origins is much, much more challenging than just affirming a "historical Adam."

Third, I have been doing what I do for a long time now, and I have a great deal of personal peace and confidence about my position as a creationist.  I just don't feel a need to constantly reassure my audience or even myself that I'm a creationist.  I suppose some might think that I should be more indignant because of all these evolutionists undermining the truth or some such, but I'm far more unsettled by fellow evangelical Christians promoting evolution than by non-Christians doing it.  They really should know better.

Fourth, this stuff is exciting!  I can't understand how any scientist could look at a fossil discovery like H. naledi and not get their heart beating a little faster.  Sure, maybe I don't know what to do with it right away, but I would never dream of reacting with annoyance or indifference.  For a scientist interested in human creation, new fossils are always welcome.  Will they affirm what I already thought, or will they require me to revise some interpretations?  Will new discoveries help me resolve lingering, unanswered questions?  What will these new fossils tell me about God's creation?

I can be excited about new fossils, because I have confidence in God the Creator.  At the end of the day, even if a new fossil upends my old way of thinking, God is still Creator.  That faith liberates me from the anxiety and worry that seems to plague some Christians when new fossils are announced.  My God is the God who called the universe into existence and led His people into a promised land and saved my soul.  Death itself could not keep Him in the grave, and some old, dead fossils are not going to change any of that.

At the end of the day, I'm an explorer.  I'm standing on the edge of an amazing frontier.  Every new fossil discovery is another corner of that frontier opened up.  Every new genome sequenced is a map to parts hitherto unknown.  I say we have nothing to fear.  I say let's go explore!