The new australopithecine and the multiplying of species 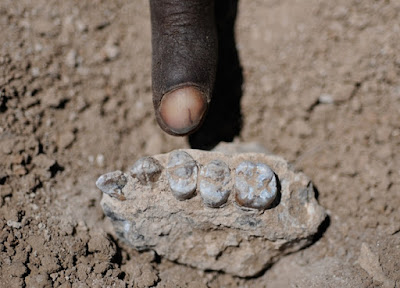 The headlines on my newsfeed this morning are all excited about the newly announced Australopithecus deyiremeda, and some are hailing it as a "human ancestor."  I doubt that it's related to humans, but I think there's a much more interesting story that most of the news outlets won't pick up on.

First of all, what was discovered?  Some jawbones and teeth (see above).  That might not seem very exciting, but these jawbones and teeth are really different from others that have been found from previously-known hominins.  They're different enough that the researchers feel justified in announcing a new species in an article in Nature.  Looking at their graphs, the teeth definitely have a set of characteristics that is different from anything else we've seen before.  The authors think that constitutes a new species, but I'm uncomfortable making a firm baraminological judgment based only on jaws and teeth.  The authors did not include Au. sediba in their comparison sample (presumably because they were focusing on east Africa, and sediba is from South Africa), and that might have helped me decide what to say about it.  My admittedly non-expert gut feeling is that this is probably another form of australopith ape and not related to humans.

What makes this interesting to a creationist?  Well, that's a different story altogether.  For years, you may have noticed new hominins announced with some regularity.  Ardipithecus ramidus, Ar. kadabba, Australopithecus anamensis, Au. bahrelghazali, Au. sediba, Homo floresiensis, Homo gautengensis, Au. garhi, and now Au. deyiremeda are all species that have been announced since I've been reading scientific papers, and those are just the names that I recall off the top of my head.  There are probably others I forgot about.  Speaking of which, add Sahelanthropus and Orrorin to the list!

So that's a lot of species!  In fact, some paleoanthropologists have become concerned that there are too many species to realistically live together at the same time.  Typically, species living together in the same area need to be different in some way.  For example, they can't all eat the same food or prefer the same nesting spots.  If they did, they would be in direct competition for those resources, and eventually one would win and there would be fewer species living in that area.

When we see very similar species living together in the same area at the same time, this suggests that either they're not really different species or they are subtly using the environment in different ways.  I really want to emphasize that this multiplication of species is not a problem for evolution per se.  There are plenty of examples today of very similar species living in a particular location.  Examples include the honeycreepers of Hawaii and the finches of Galapagos.  These different species can inhabit these limited locations by using different resources.  For example, Galapagos finches with big beaks eat big seeds, and those with small beaks eat small seeds.  So it's not impossible to imagine a bunch of australopith ape species all sharing the same habitats in east Africa, as long as they had slightly different ways to exploit the environment.

For me as a creationist, however, I'm excited about this discovery for a very different reason: I expected it.  According to my understanding of kinds and species, the "two of every kind" that left Noah's Ark experienced a rapid and unprecedented increase in diversity in those first generations after the Flood.  I don't know how many generations this diversifying lasted, and I don't know how diverse each kind became.  In general, I think every kind diversified to an extent, and some generated many new species.

Remember your ecology, though: If you have too many similar species in one environment, it's not likely that they will all survive.  I think that explains why when we look at the post-Flood fossil record, we find all manner of species that have gone extinct.  In the exuberant rush of new species originating after the Flood, not all could survive, especially with the gigantic environmental fluctuations occurring as a direct result of the Flood.

All that to say that the multiplication of newly discovered australopith and human "species" in the recent years doesn't surprise me a bit.  It's exciting to find more groups that experienced rapid diversification after the Flood.  I think it's yet another confirmation that we creationist biologists are on the right track.