From the Library: Comparisons of Structure in Animals. The Hand and the Arm 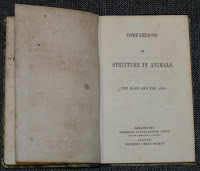 I was searching online the other day for nineteenth century comparative anatomy books, and I stumbled across this title. I'd never heard of it before, but I couldn't resist. An anonymously authored book on the comparative anatomy of vertebrate forelimbs published by the American Sunday-School Union? That's right up my alley. Fortunately, such an obscure work was not expensive.

According to WorldCat, the original book was published in England around 1848 by the Religious Tract Society. Its unnamed author was one William Charles Linnaeus Martin, onetime curator of the Zoological Society's museum and author of many nature books for general audiences.

When I saw the title, I wanted to know whether the book would follow the pattern of Richard Owen's roughly contemporaneous On the Nature of Limbs or Charles Bell's Bridgewater Treatise The Hand. Bell's approach is basically Paleyan: design is evidenced by the fit between the anatomy of limbs and the functions they perform. Owen's approach was much more abstract, emphasizing the homology of the limbs as evidence of an overall design plan.

Not surprisingly, Martin sided with Bell. He wrote,

It is not only in form and structure, in the possession or absence of limbs, in the modifications of those limbs, in the possession or absence of a brain and spinal cord, in the possession or absence of the various organs of the senses, and in the adaptation of those organs for different conditions of being, that the animal creation offers such an apparently endless variation; nor yet is it in size, though the range of magnitude is from the Greenland whale to the animalcule, of which thousands sport and play in a drop of water; but also in the purposes, the final ends of existence, for which animals were created, that this boundless extent of variation obtains. In multitudes of instances, indeed, purposes to be answered by the existence of animals are beyond our finite comprehension, yet reason urges us the axiom that nothing is created in vain; and it is not because our imperfect minds cannot comprehend the whole of the mighty scheme of creation, that we are to doubt that even the minutest animalcule is created for some specific object, and has its appointed part in the great system.

Given the date of composition, this was the easy route for explaining limbs. They were designed to do what they do. The rest of the book contains a survey of limb modifications among all vertebrates (even fish), but no real sense of the unity of the structures is given. He does mention "unity of design" here and there (p. 20 for example), but it is definitely not a central theme, despite the obvious affinity among vertebrate limbs.

The other question I had when I saw the title was why a religious publisher would bother with such a specific subject? I could imagine a general natural theology book being of interest to a religious publisher, but a comparative anatomy of vertebrate limbs? Martin tacks on a religious denoument, where he adds in a message about salvation. His transition is

And here the naturalist may end - he has offered proofs of the power, wisdom, and goodness of our Lord Jesus Christ, for by him were all things created - and pursuing his argument, has shown the position which man occupies in the animal world, a position perfectly unique, but no less in harmony with his physical than his mental constitution.... But the Christian contemplates man under another aspect - he considers him as he is represented in the revelation which the Almighty has condescended to make, and which depicts him as fallen from a state of rectitude... (pp. 189-190)

So that's it. A peculiar little historical curiosity, which you can read for yourself at Google books.

[Martin.] [c.1848?] Comparisons of Structure in Animals. The Hand and the Arm. American Sunday-School Union, Philadelphia.