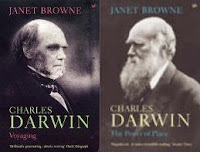 I guess I've been on a biography kick lately. I didn't even notice it until I sat down to write this, and I realized that recent posts have focused on Haeckel (Richards's new bio) and Darwin (the latest issue of Answers mag). Now I'm going to write about Darwin again, but I'll try to make my comments short and worth your time. Well... at least worth your time.

I picked up both of Janet Browne's biographies of Darwin, Charles Darwin: Voyaging (1995) and Charles Darwin: The Power of Place (2002), when I visited Down House on a miserably cold and rainy day last March. Some years ago, I read Desmond and Moore's Darwin: The Life of a Tormented Evolutionist, which I really enjoyed. Browne's two massive tomes were a nice expansion of the story I already knew.

Not surprisingly given the size of the books, Browne moves along at a leisurely pace, taking many opportunities to stop and appreciate the scenery. She includes sections on the Shrewsbury School that Darwin attended, Mudie's Circulating Library (like Netflix with books), and contemporary satirical cartooning, along with many other rabbit trails that give a much richer context for understanding Darwin's life and influence.

My only reservation about the books came from a single factual error about St. George Jackson Mivart. Mivart was a Catholic evolutionist who broke ranks with Darwin's natural selection clique and insisted instead that an inner drive to adapt was the most important mechanism of evolution. Strangely, Browne repeats the rumor that he was excommunicated because he was an evolutionist, even though this is known to be false. Mivart's bishop denied the Eucharist and a Catholic burial to him because Mivart refused to recant an article on Hell that had been placed on the Index of Prohibited Books. But that's an otherwise small blemish on a fine biography of Darwin.

So why read a Darwin biography? I enjoy learning about Darwin's life, his influences, the form of his argument, and how his argument was formulated in the first place. More importantly, learning about the man humanizes him. I assign a short Darwin biography (Keynes's Darwin, His Daughter, and Human Evolution) to the students in my Origins class. Without exception, they report back that the Darwin they met in the book is nothing like the Darwin they thought they knew. Darwin was not a monster or Christian-hater or plagiarist or idiot or any of the other myriad names we creationists like to call him. He was a decent, generous, and brilliant fellow, and we do him a disservice to pretend otherwise.

I like deconstructing the creationist stereotype of Darwin because it simply isn't fair. I understand that there's a psychological appeal to belittling and mocking opponents, but I think that kind of behavior is beneath us as Christians. Yes, I disagree with many of Darwin's evolutionary ideas, but that doesn't excuse slandering the man. Darwin's just a flesh and blood human being, and the battle we're in is "not against flesh and blood" (Eph. 6:12).

Unfortunately, the years of denigrating Darwin have produced people who really believe the worst about him. I wish I could assign a Darwin bio to everyone.

Now if you want to get these books, I highly recommend the Pimlico editions from the UK, since they have far superior cover art (pictured above) and they will look splendid on your bookshelf. The American editions by Princeton UP are less expensive, but the cover art leaves a lot to be desired. See for yourself: