Reading: A Tragic Sense of Life 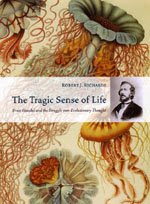 I just finished up Robert Richards's new A Tragic Sense of Life: Ernst Haeckel and the Struggle over Evolutionary Thought. As with Richards's other books, this was well worth the time invested. When I started the book, I knew next to nothing about Haeckel. I knew he was the primary popularizer of Darwin in Germany, merging evolution with the strong morphological tradition of his native country. I knew a little bit about monism, primarily by reading the works of his Jesuit opponent, Erich Wasmann. I also knew that creationists portray him as a proto-Nazi and a fraud. Check out the titles of some of the creationist articles published about him over the years:

"Haeckel: Legacy of Fraud to Popularise Evolution"
"Graphic Fraud"
"Influential Darwinists Supported the Nazi Holocaust"
"Ernst Haeckel: Evangelist for evolution and apostle of deceit"
"Haeckel: the legacy of a lie"

Subtle they're not, but they're also not alone. Some modern historians have made similar accusations.

I was initially interested in the book primarily to learn more about Haeckel's interactions with Wasmann (more about that later), but I found that the standard story about Haeckel isn't quite so straightforward. In particular, monism is not merely atheism, Haeckel's distorted diagrams weren't necessarily fraudulent, and he made a poor proto-Nazi.

Monism. Haeckel's answer to organized religion was monism, a view characterized as atheistic or materialistic by his opponents. According to Haeckel, though, monism was the belief that both matter and spirit were different manifestations of the same thing. Is the difference between monism and atheism merely splitting hairs? Wasmann obviously thought so.

Fraud. Richards covered a lot of territory here, but one of the more significant pieces of information I learned was that the diagrams at the center of the controversy were from popular not technical works. Some might think that an unimportant distinction, but I agree with Richards that the illustrative diagrams found in educational, popular scientific works are necessarily subject to some distortions and simplifications. Haeckel definitely made a few lousy decisions (for example, deciding to print one diagram three times and pretend like it illustrated different things), but his other embryo diagrams were merely over-stylized, according to Richards. Given the fact that these were always intended to merely illustrate concepts rather than faithfully or photographically represent actual embryos, I tend to agree that it's hard to conclusively label Haeckel's diagrams fraudulent, especially since the diagrams became more accurate in successive editions of Haeckel's books.

Racism. This was the most interesting revelation of all: Haeckel was not anti-semitic. Like all nineteenth century scientists, he believed that there were more and less advanced races, but he placed the Semites in the upper tier of his racial hierarchy. Haeckel also expressed positive opinions about German Jews, and his biological doctrines were denounced by the Nazis.

Though Richards paints a sympathetic portrait of Haeckel, he still can't cover up Haeckel's rough edges. For example, Haeckel took off on a scientific expedition when his wife was eight months pregnant with their first child. His wife was understandably displeased by this plan. Then there was the six-year extra-marital affair with a woman thirty years his junior, and his lifelong idolization of his first wife Anna Sethe, who died after just 18 months of marriage. He apparently considered Anna his "true wife," even after he remarried. Haeckel was no saint by any means, but on the other hand, he's not quite the devil his enemies make him out to be.

But don't take my word for it. Read the book.