My visit to BioLogos 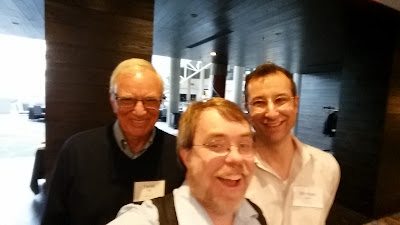 As my regular readers know, I recently presented my work with Darrel Falk at the annual BioLogos conference.  Michael Gulker (president of the Colossian Forum) came along to moderate.  My visit was quite short.  I arrived about 10 am on Friday, gave my presentation at 1:30 pm, then hit the road around 3:00 pm.  The brevity of my visit was not due to my disdain of the conference subject.  I simply was attending another conference that weekend, and I needed to drive back to Cleveland.  (More about that in a future post.)

For those of you not familiar with this whole thing, BioLogos is an evangelical organization dedicated to promoting the compatibility of evolution with evangelical Christianity.  I am a young-age creationist, and I reject certain portions of the evolutionary story as entirely incompatible with the Christian faith and identity.  Creationists and evolutionists typically fight like cats and dogs.  At least that's the impression you get on Facebook and internet chat rooms.

In contrast to most other creation/evolution debates, I've been getting to know Darrel Falk (former president of BioLogos) over the past six years, thanks to the work of The Colossian Forum.  It's been rewarding and frustrating all at the same time, but one thing I know for sure: Darrel has made me a better creationist and Christian, and I'm grateful for that.

Our presentation at BioLogos centered around our recent book together, The Fool and the Heretic.  Even though BioLogos graciously gave us an hour-long session, it still seemed way too short.  I would say there were about sixty people in the crowd, and we spent most of our time talking about our relationship rather than our positions.  After the presentation, several people came to talk to me and Darrel, and everyone was extremely cordial.  Well... almost everyone.  There was one person who seemed reluctant to be introduced to me, and I could tell that he had no interest in our book or our project or anything to do with folks like me.  Still, he wasn't overtly hostile.  Just dismissive.  So in case anyone was worried about that, everyone there was very nice.

As for my time there, I felt there were many things that I wanted to say that never really came up.  I left feeling dissatisfied, like I left my work unfinished.  I intended to be more forceful about my own position and what I thought about BioLogos, but we spent more time presenting and answering questions about our relationship and the work of loving your "enemy."  Time just went by so fast, and you just can't say everything you're thinking.

So if I were to have my say now, I would say this:  I think the dispute over evolution and theology is not a symmetric one, as my friend Paul Garner would say.  My own efforts to understand God's creation from a creationist perspective could very well be wrong.  But if I am wrong, I have made mistakes about science because of my adherence to what I believe to be the Word of God.  On the other hand, if BioLogos and their followers are wrong, that seems to be a more serious matter.  They offer us a rather radically different vision of the Bible and the Christian message of sin, its source, and its consequences.  These strike me as far weightier matters that warrant great fear and trembling rather than cavalier enthusiasm.

Now I'm sure BioLogosians (what do we call them?) would turn this around and claim that young-age creationism, with its aggressive "antiscience," brings shame on the gospel and drives away learned scientists and scholars from salvation in Jesus.  I don't necessarily think that's true of itself, but I would say that the more belligerent and less knowledgeable people on all sides do create a poor reputation for Christianity.  As much as I'm known for my frustration with false claims of creationists about evolution, I have also endured much ridicule and slander from Christians on the other side.  Lately, most of them just dismiss us as liars and charlatans.  That might play well to a certain demographic, but it's fundamentally false.  So if you want to be people of the truth, stereotyping your ideological "enemy" isn't the way to do it.

One final note: In addition to thanking The Colossian Forum for all their support over the years, I also wanted to thank Darrel for taking great care of me at the BioLogos conference.  He was an extremely kind and gracious host, moreso than even I expected.  I greatly appreciated his welcoming spirit.

What's next?  Heaven only knows.  We're definitely talking about the next steps in our journey together, and I'll definitely keep you posted as we continue our work.