Darrow statue unveiled by atheists poking at him with umbrella

Well that's that.  The statue is here.  There was no fuss.  There was no protest.  Two days later, the statue still has its head and no spray paint.  Despite various media outlets trying to manufacture controversy, there was very little.  What a surprise, I say dryly and sarcastically.

Longtime readers will recall my ongoing commentary on this story (here, here, here, and here).  Most recently a blogger who goes by the name "Friendly Atheist" got riled up interacting with a local opponent of the statue, June Griffin.  She was talking about militias and opposition to the statue, and I suspected it was hyperbole, which so far it appears to be (the militia, not the opposition).  Mrs. Griffin did not attend the unveiling, but she did leave a message for us in front of her store:


The unveiling itself was not without contention however.  As part of the Scopes Trial festival, a banner that read "Read your Bible" was hung on the courthouse behind the Darrow statue.  It is a recreation of a banner displayed at the trial by evangelist T.T. Martin (author of Hell and the High Schools).  The modern banner has been used at the Scopes festival for years.


This banner greatly upset the atheists from the Freedom from Religion Foundation, who didn't want that banner in the background of photos and video as they held their event.  So they threatened to sue if the banner wasn't removed.  That didn't really go over very well, especially after the county capitulated and took the banner down to cheers from the atheists in the audience.  Didn't your mammas ever tell you to be a polite guest?  Don't act like a jerk?  Be a good sport and gracious in victory?  I guess not.  So here's a photo of the Darrow statue with the banner restored.  Enjoy!


You know what's really weird about the atheists' lawsuit threat?  This was on the other side of Mrs. Griffin's sign: 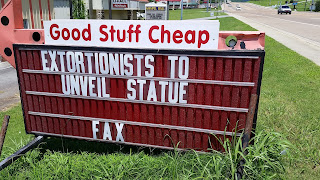 Extortion is "obtaining money, property, or services from an individual or institution, through coercion."  Oddly prescient?

The program itself went fine.  The speeches weren't intentionally offensive.  There were lots of police officers, uniformed and otherwise.  The statue is beautiful.  News outlets came from all over, and nothing really exciting happened, except for this dramatic unveiling:

So that's it.  The only other notable event was discovering one of my students posing with the statue on RheaReview.com (see photo 17).  Not sure what that was all about, but that's cool.

If they didn't like the "Read your Bible" banner, the Freedom From Religion Foundation would probably be apoplectic to know that Rhea County's first independent creation research laboratory will open for business this fall.  I am delighted by this fact.