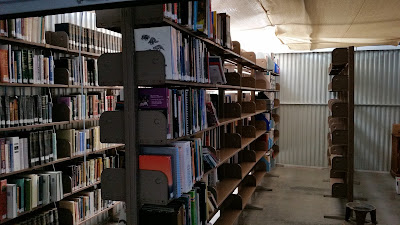 When Core Academy launched in 2013, I wasn't sure what to do with the old CORE library.  I knew we had something important in the library.  It was a valuable resource, and it is one of the few such libraries that is publicly accessible.  But I wasn't sure the new Core Academy would be able to support it and keep it growing.

I was very wrong about that.  The library grown substantially in the past three years, both in overall size of the collection and with important new items added. A few of the new things we've acquired:


We've also added so many books to the collection that we're literally overflowing our space.  We've never had quite enough room for the library, and we've had to split it up in different rooms for the past ten years.  As Core Academy has grown, the library has become cluttered and hard to use.  Recently, the Lord answered our prayers and made some affordable new space available to us.  At last, we have enough room for the entire library to be relocated to a single location!  You can see our new location in the photo above (we just started moving the journal collection).

You might be wondering exactly what the big deal is.  After all, why would a startup nonprofit bother with the expense of a library?  The reality is that all good research begins at the library.  Every scholar builds on the foundation of scholars that came before.  As we at Core Academy seek to build a better way of understanding science and faith, we rely on the work of hundreds of scholars found in our library.  There we can find out what ancient Christians thought about Cain's wife or just when flood geology really began.  The library is our great cloud of witnesses that cheers us on as we run the race of faith.

Cleaning up and moving a library as big as ours is no small task, though, and we could use some help.  If you are local to Dayton or the surrounding area and you would like to volunteer some time to help us with moving, cataloging, labeling, and shelving our library, please send me an email.  We'll add you to our mailing list of volunteers.  Now that school has started, we'll have a lot more time every week for local work like this, and we could really use the help.  I also want to say thank you to everyone who already helped with this project or who donated money or items to the library.  You are a huge blessing to us and to the future generations of faithful Christian science students that we minister to.