December 17, 2013
The archives at Core Academy got an early Christmas present this year: 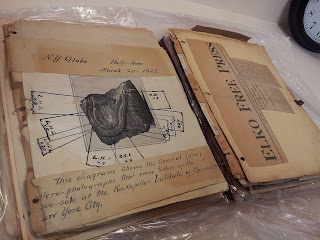 Thanks to an anonymous donor, we received this 1920s vintage notebook chronicling John T. Reid's alleged "Triassic shoe" fossil.  The notebook was Reid's personal scrapbook about the find and contains correspondence from Alfred Watterson McCann and Sir Arthur Keith, among others.  You can read about the subject of this notebook at Glen Kuban's site.

Reid was a mining engineer who lived in Lovelock, NV, and from the reports I've seen on the web this morning, he seemed quite excited about "anomolous" fossils and archaeological remains.

Since we only just received the notebook this morning, I haven't had much chance to study its contents, except to note that the original micrographs from the "Rochester Institute of Research" (presumably the Rochester Institute for Medical Research) are included in the notebook.  Having examined these photos, I am not convinced that the "seams" of the "shoe sole" actually exhibit the remains of stitching.  Frankly, I don't see any hint of stitching at all.

But I shall reserve final judgment until I've had opportunity to read through all the contents and examine them thoroughly.  Unfortunately, the rock itself was not included with this gift, and its current whereabouts are unknown.  So I guess the true identity of the item will likely remain unsettled.

But if you ask me, I'd say it's a concretion.  It looks exactly like a concretion, and I don't see any reason (other than the vague shape) to say it's a shoe.