From the Library: Hunter's Elements of Biology 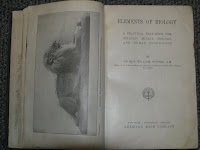 While browsing in a local antique mall in Dayton recently, I stumbled upon a bookcase full of old textbooks. To my delight, I found George William Hunter's 1907 Elements of Biology, the predecessor to his 1914 textbook A Civic Biology that featured prominently in the famous Scopes trial. Best part? It was only $2. I love a good bargain.

I've only briefly skimmed the book, but it appears that the concept of evolution occupies a much lower place in this volume than in A Civic Biology. That's not to say that the later textbook covered evolution in great detail. Evolution appears briefly in A Civic Biology when classification and heredity are discussed.

In Elements of Biology, evolution appears to be barely mentioned. On page 7 of the introduction we read, "In the second half year the so-called evolutionary order may be followed with the animal types studied." Hunter briefly covered the evolution of the horse on pp. 315-316, where he concluded,


So ultimately by very gradual variation the present horse was evolved. This purely hypothetical history was probably repeated with variations in the case of many other species of animals.

Hunter's discussion of "Man's Place in Nature" is conducted purely in terms of classification, with no indication or implication that humans are actually related to animals. This paragraph is carried over to A Civic Biology, where it is followed by a section on "Evolution of Man," which largely reflects the racist opinions of the day.

My favorite part of this copy of Elements of Biology is the extensive inscription on the inside cover, written by a former student of this book:


This book has brought me many unhappy hours - that is, when I would study & study until my eyes have popped out, and go into Prof. M. room to recite. If I couldn't tell every word (the, it, & they) he would fuss & fuss. Thank goodness he's got someone to fuss with & he perhaps will let the students be. - I hope so.

Yikes. I'm glad to see science education has improved ever so slightly since Prof. M. was teaching!