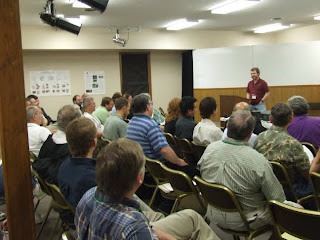 What a great conference! Thanks to everyone who helped out and presented, and especially to those who stepped in to help make airport runs after the college van broke down. I had such a good time getting re-energized for the work ahead. We've got lots of great ideas for the future, and I'm excited about seeing them to fruition.

Meanwhile, for those of you keeping score, the final day of the conference opened with my own talk on terrestrial mammal families, followed by talks on mutations and halobacteria. The afternoon was spent going through the Coconino talks, which were extremely interesting. I'm excited to see that project really paying off.

One thing the CGS and BSG decided was to adopt a name for our conference to help with marketing. We selected the simple name "Origins," which would encompass just about any subject you'd like. As I announced previously, Origins 2011 will be held in Rapid City, SD on July 27-29, 2011. You'll probably want to reserve some days around that date (say the 26th to the 31st), since we're also planning field trips and a special conference for the general public.

We're in the very early planning stages for Origins 2012, but I can confirm the dates will be July 25-27, 2012. We're hoping for a special theology emphasis at this conference, and the venue will be back east somewhere (possibly the Washington, D.C. area). Stay tuned here for more announcements as we begin to finalize details on 2011 and 2012.

And remember - it's not too soon to start thinking about venues for 2013 and beyond. If you're interested in hosting an Origins conference, let us know soon, so we can get you on the calendar.