July 20, 2010
Some readers might know that I double as curator of the Henning Museum at Bryan College in addition to my duties as CORE director. We've been really busy this summer upgrading some of our exhibits, and I wanted to give you a sneak peak. 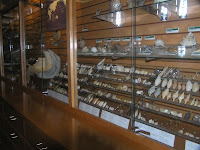 We quadrupled the number of shells on display. This is the museum's most significant collection, and we wanted to put as much of it on display as we could, which is to say we've put maybe 2-3% of it on display. We also added a giant clam to the exhibit. It's not big enough to bathe in, but it's still pretty large. 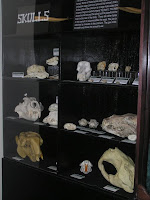 We reworked and expanded our skull exhibit. Joining the lion, leopard, and various local critters are the North American porcupine, a jackrabbit, and casts of a dugong and a giant beaver. 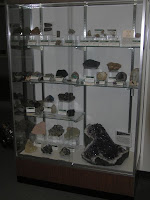 Our mineral exhibit got a huge boost from a donation of six beautiful specimens from Bulgaria and the acquisition of a huge amethyst geode. Very nice. 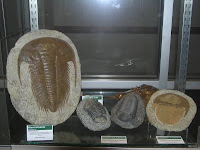 In addition to many locally-collected insects and spiders, our new arthropod exhibit will showcase specimens from our trilobite collection.

We plan to have an open-house shindig when school starts, but you can stop by to see the museum any time we're open. Admission is always free, but we do appreciate donations.