From the Library: On Some Instances of the Power of God

This week's book is an extraordinary look into Sir Richard Owen's understanding of design. The volume it appears in is titled Lectures Delivered before the Young Men's Christian Association, in Exeter Hall, from November, 1863, to February, 1864. Owen's lecture is titled "On Some Instances of the Power of God as Manifested in His Animal Creation." There is also a longer book form of this lecture, but I haven't been able to obtain a copy. This condensed version still contains quite a powerful argument.

And that makes me sort of sad. As I read this essay, I thought about the ID debate and my evolutionary creationist brothers in Christ, and I wished any of them could write anything remotely as compelling as Owen had. He almost convinced me... but not quite.

The lecture is divided into roughly two sections, the first follows the title and gives examples of design. Now Owen is known as a sort of structuralist and he even criticized the sort of naive functionalist approach to design that was so popular in English natural theology. As I've mentioned before, Owen's main claim to fame was his vertebrate archetype, a pattern that he believed was used by the Creator to create vertebrates. Owen was also a functionalist, though, and used very Cuvierian reasoning in some of his work. In "Instances of the Power of God," it's this functionalist Owen that takes center stage. 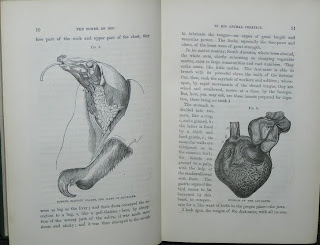 The analogy of the animal organs and systems of organs to the machines of man's invention is, however, so close, that, comprehending and admiring the rare degree of constructive skill, foresight, and purposive adaptation, in many artificial machines, the healthy intellect, studying the more refined and perfect natural structures, cannot but conceive therein the exercise of like faculties in a transcendently higher degree. Such a mind, therefore, instinctively, inevitably, rises to admiration of such transcending power; and feeling within itself the beneficial working of such organization, it blesses as well as magnifies its Divine Author. (p. 6)

So far not too impressive, but then he brings in the structuralism.

Man, to gain his purpose, directly constructs and adjusts his artificial machine. God may produce his organic machine, as perfectly and surely, in other ways, to us seemingly leading away from such end. His ways are not as ours.

I believe he is alluding here to a passage from On the Nature of Limbs, where he argues against the naive analogy between design in human artifacts and divine design in organisms. There he concludes,

Nor should we anticipate, if animated in our researches by the quest of final causes in the belief that they were the sole governing principle of organization, a much greater amount of conformity in the construction of the natural instruments by means of which those different elements are traversed by different animals. The teleologist would rather expect to find the same direct and purposive adaptation of the limb to its office as in the machine.

In his lecture, Owen then gives his example of skull development to illustrate his archetypal view of design. The example goes something like this: When young, mammalian skulls are composed of many loose pieces that can move and change the shape of the head. This is advantageous because "there is a time when this brain-case must pass through an unyielding passage narrower then the natural diameter of the case at that time" (p. 16). (His victorian sensibilities can't allow him to even mention "birth canal.") So the "final purpose of the structure of the foetal skull" was to permit compression of the head during birth. Right? Not so fast. "The skull of all vertebrates or back-boned animals is built up, as a general rule, of the same number of pieces arranged in the same general way," even birds. So why do unhatched birds need to compress their skulls? They don't. So the development of the vertebrate skull is not caused by the need to compress the head during birth. Instead, "The law of the development of the skull provides the condition of safety in childbirth."

At this point, Owen makes a pretty abrupt shift in theme and turns to the doctrine of accommodation. Owen unequivocally reveals himself to be no friend of creationism. He continually plays on one theme: Christ's rebuke of the Sadducees in Matthew 22:29, "Ye do err, not knowing the Scripture, nor the power of God." When addressing those who would use scripture to inform natural history, Owen claims that such individuals greatly err, not knowing the power of God (i.e., the natural revelation of creation). Predictably, he highlights the cosmological disagreements (esp. Galileo) as evidence of individuals who think they know the scripture but do not know the power of God. He also takes aim at those who believe snakes arose as a result of the Fall, that animal and human death is a punishment for sin, that the earth is only 6000 years old, and that animals dispersed from "one Asiatic centre within a period of 4,000 years." Owen still believes that species arise "by a concomitant and continuous operation of Creative Power," but in this sense alone can he be called a creationist. On other doctrinal points, he has more in common with evolutionary creationists than young-age creationists.

Why did I find this compelling? I guess it's Owen's open embrace of theology. He cites scripture, speaks of the Creator, and is openly Christian in his approach. He's not playing games pretending to hide his intent and theology for political reasons. And his biblical arguments are impressive. I've never seen anyone use Christ's words in that way before, and it's definitely a humbling refrain. But I still think there's a lot more clarity to the natural history recorded in scripture than many who embrace accommodation seem to think (here and here). So I'm sorry, Sir Richard, but I'm not convinced by your argument. It is an impressive one, though.