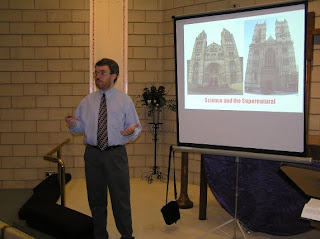 My presentation on "The Challenge of Darwin" in Coventry was rather uneventful, but the presentation in Cambridge on "Science and the Supernatural" sparked a spirited discussion led off by a gentleman who deeply disagreed with what I said.

I have to say that I'm not very experienced at giving public presentations of this sort, so I was definitely caught off guard when the discussion began after my talk. I don't wish to speak for anyone else, but from my perspective, I thought much of the debate was sparked by the controversial nature of creationism in general. I was only attempting to make a very narrow point, that it's very difficult to distinguish science from nonscience. Or as I said during the discussion, you can call creationism "bad science" but I don't think it's fair to say that it's not science. The problem is that I'm dealing with creationism, and that has broader social and scientific implications that I just didn't want to deal with at that presentation. Obviously, others did want to deal with those implications. I should have been more prepared for that inevitability.

I do want to say that I agree that a lot of creationism isn't science. When we talk about the biblical text, that's obviously not science. Some creationists don't even try to do science, and they would admit that. But when creationists make testable empirical claims, that's science. We might argue over whether the claims are right or wrong (or just plain stupid), but in doing so we will have to do science. I just don't see a sharp boundary between science and nonscience. I see an enormous overlap.

One final note: I made a mistake during the discussion. As I said above, I'm not terribly experienced at doing this, and I allowed other members of the audience to come to my defense. It turned into a sort of free-for-all, with the audience trying to debate the gentleman with the pointed questions. I really should not have let that go on. I should have restrained my defenders (well-intentioned though they were) and allowed the important disagreements to be voiced fully. Perhaps we could have come to more common ground. Or maybe you didn't want to find common ground with me. At least we could have tried. If the gentleman from the audience should ever read this, I do apologize.

I have one final presentation on Tuesday in Elsenham on the same topic, and I know now how better to approach the subject.
CORE