March 02, 2009
Despite the best efforts of various airlines to delay our speakers, our symposium "War and Peace: 150 Years of Christian Encounters with Darwin" went quite well. In our first session in Friday chapel, I gave a brief overview of the life and influence of Charles Darwin. Using the built-in camera on my laptop to project a live image, I illustrated the talk with the fingerpuppet, which was a BIG hit. 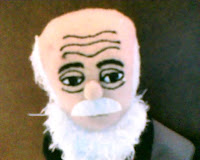 After lunch, speakers Jon Roberts, Steve Matheson, and I toured some of the local sites associated with the Scopes trial. Here are Steve Matheson and I posing where it all began: the failed Cumberland Coal and Iron Company. (Yes, I did go hiking in my suit, and yes, I did feel kind of silly for doing it.) 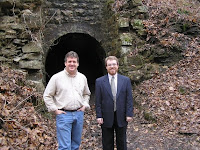 The opening session in the evening by Jon Roberts gave us an excellent overview of the American Protestant response to evolution, based in part on his book Darwinism and the Divine in America (which makes a great gift).

Saturday morning began with Ted Davis's really interesting look at the cartoon iconography of the antievolution and antimodernist movement of the 1920s. Steve Matheson then gave an overview of the evolution controversy in the Christian Reformed Church, which strangely enough did not happen until the 1980s. I concluded the presentations with my paper on Erich Wasmann, the evolutionary evolution critic (figure that one out). The symposium wrapped up with a panel discussion, which had some pretty challenging questions.

I'm told there will be podcasts of the talks made available for free, and I'll post here when they are online.
CORE research