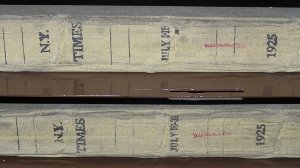 For those just joining us, "From the Library" spotlights interesting items in the library of the Center for Origins Research at Bryan College. For past entries, click here.

Well, it's heritage week here at Bryan College, since tomorrow (March 19) is William Jennings Bryan's birthday. I thought it would be a good time to highlight these bound New York Times volumes from the CORE library. As you know (or should know), July 1925 was the month of the Scopes trial here at the courthouse, the month Bryan died, and the month that the "William Jennings Bryan Memorial University" (Bryan College) was devised. (Notice the lack of Clarence Darrow College. Not that I'm rubbing it in or anything.)

These old newspapers have more of a novelty value than anything else. For example, while the Scopes trial was going on, you could buy a new Chevrolet for less than $1500, rent a furnished apartment overlooking Central Park for $175 a month, or see Doulas Fairbanks in Don Q: Son of Zorro at the movies. How times have changed.

But you're not reading this blog to find a 1925 New York apartment, so what do I think of the Scopes trial? That's an interesting question. On the one hand, it's pretty much the reason I have a job today. The plans for Bryan College were hatched during the trial, and it was that heritage that led former Bryan president Ken Hanna to start CORE in 1989. If it wasn't for that trial, I would be working somewhere else doing something that might be far less personally satisfying.

On the other hand, I do have some pretty strong feelings about creation trials in general. Whatever you might think about the merits of the scientific or legal arguments, one thing is pretty clear: The legal strategy pursued by creationists over the past 85 years has been a complete and utter failure. We've been consistently ruled against time and again, and yet we still try to come up with new ways to sue our way into the classroom.

Here's the ugly secret that no one wants to face: We can't sue our way into the classroom. Nor can we bully our way in by stacking the local school boards with sympathizers. These strategies have not worked, and they will not work. It seems to me like it's time for something completely different.

There's really only one way into the classroom. We have to earn it. I'm sure you're thinking that no one will listen to us because they're biased against us. Hogwash. They don't listen to us because our arguments are unconvincing, and we present them in such a strident and disagreeable way. You'd be surprised what can be accomplished with humility, an acknowledgement of the evidence for evolution, and a simple stand on faith in God's Word. Yeah, people make fun of me (four, five, whatever), but a lot of people are listening (a lot). 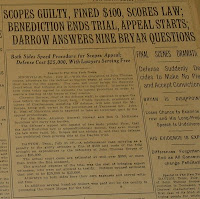 Even though Scopes was convicted, I definitely see the Scopes trial as a part of the legal failure of twentieth century creationism. That trial was nothing more than a publicity stunt, and at least in the mind of Darrow, its purpose was mocking the faith of William Jennings Bryan and thousands of other Americans. I think Bryan College stands as a testament to the truth that God works all things together for good, even our biggest blunders, failures, and sins. As a sinner, I think that's pretty good news.
CORE FTL library