From the Library: John Lightfoot's Harmony of the Four Evangelists 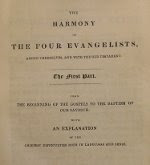 Seems like everyone with any stake in the creation/evolution debate knows about the year 4004 B.C. This was the year estimated by James Ussher as the year of Creation. The year 4004 B.C. (or something close to it) can be derived using the genealogies in Genesis 5 and 11. Lesser known than Ussher's work is the similar chronological work done by John Lightfoot, vice chancellor of Cambridge University. These two scholars exemplify the seventeenth century interest in biblical chronology.

Lightfoot's chronological work was published in the Prolegomena of his book The Harmony of the Four Evangelists among themselves, and with the Old Testament, with an explanation of the chiefest difficulties both in Language and Sense, the first part of which was published in 1644. Our copy is from the thirteen volume Whole Works edited by Pitman and published in 1822-1825. He begins his comments with this statement:

And yet, how unfixed is this time and age of the world, in which so great a mystery came to pass, and upon which so general accounting doth depend, in the various reckonings of learned and industrious men! ... The only way to settle, in such variety, is, to take the plain and clear account and reckoning of the Scripture, which hath taken a peculiar care to give an exact and most certain chronicle to this time.

Notice that he emphasized the "peculiar care" that the Scripture takes in the genealogies of Genesis 5 and 11. These genealogies are uniquely detailed among the biblical genealogies by recording multiple ages for each patriarch.

In 1896, Andrew Dickson White published an alleged quote from Lightfoot in White's book A History of the Warfare of Science with Theology in Christendom. According to White, Lightfoot fixed the date of the creation of man at "October 23, 4004 B.C., at nine of the clock in the morning." This phrase does not appear in Lightfoot's work. It is true that Lightfoot believed that man was created at about 9 a.m., but the year and date appear to have been added by White and the quote itself is fabricated. Lightfoot put the "birth of the Redeemer, in the year of the world, 3928" and speculated that the date would have been on the (fall?) equinox.

Today, we often hear Ussher's 4004 B.C. date mocked with snide comments about October 23 and the time of day. This is a misattribution of a fabricated quote from White, and yet it gets repeated as if it were accurate. I'm reminded again how vigilant we should be regarding controversial topics. It is very easy to accept as competent and authoritative those with whom we agree, while we react with undue skepticism or even hostility towards those who disagree with us. We ought not be carried away by the heat of the argument but instead carefully evaluate the accuracy of all claims, whether or not they are friendly to our own beliefs.
CORE FTL library