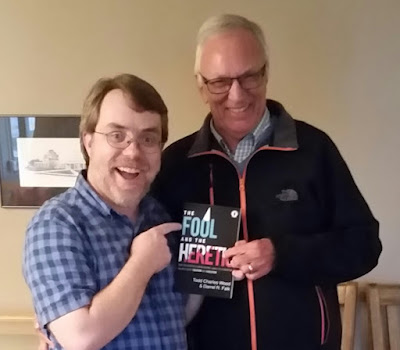 Longtime readers know that Darrel Falk and I have been working on a book together called The Fool and the Heretic.  It's kind of a creation/evolution book but also a memoir and a commentary on conflict and the unity of the church.  I can't remember how long we've been working on this book, and I am cautiously glad to see it finally in print.

It's a difficult book, though.

It was immensely difficult to write.  I felt like I only get one chance at this, and I need to write something so astonishingly good that it will be unforgettable.  I kept editing and tinkering and rewriting my bits, and finally I had to tell myself, "That will have to be good enough.  I can't keep everyone else waiting while I pursue some impossible perfection."  I actually fast-tracked The Quest on my list of things to do, because I wanted a chance to make a fuller and clearer statement of my own before The Fool and the Heretic arrived at retail.  I didn't want anyone to misunderstand anything I wrote there.  I'd say this is the riskiest thing I've ever written.

Early feedback is eye-opening to say the least.  There are people I know that I think will understand what I'm doing and will probably appreciate the book.  There are others, though, that will dislike it and maybe even hate it.  There are some that I just dread to know what they think.

I'm not the least surprised to find that folks mostly in Darrel's tribe seem to react favorably toward the book.  I think folks in my tribe will have a much harder time.  Discovering that creationists are not all fools is perhaps surprising and intriguing to those inclined to think otherwise.  Finding that a genuine Christian could still hold fervently to an evolutionary perspective is more unsettling to those inclined to think of evolution as non-Christian.  Far more unsettling.


I confess I do not believe the disagreement about origins is symmetrical. If theistic evolutionists (‘evolutionary creationists’) are wrong, they have messed up some really foundational theology – theology that underpins central New Testament teaching about Christ’s death and resurrection – and, in the light of eternity, that strikes me as a far more profound error than some messed up science interpretations if young-age creationists like me are wrong. I cannot claim, therefore, to have approached this book from a position of neutrality or objectivity – if such a perspective is even possible.

And so, I came to this book with much trepidation, even suspicion, and, indeed, reading it was an unsettling experience. By turns it irritated me, saddened me, frustrated me, perhaps at times even enraged me. There were moments when I put the book down and shook my head and muttered, “But you don’t understand – and anyway you’re just wrong!” But I also found that the stories unfolding within its pages were compelling, fascinating, and often deeply, deeply moving. And perhaps I was able also to discern the Holy Spirit of God at work in the lives of these two men, who, despite their profound, seemingly intractable differences on origins, were willing to make themselves vulnerable in order to engage with one another at more than a superficial level.

That's exactly how I feel about it, and I'm living it!  There's something exhilarating and exciting when Darrel and I are together, but our differences are so central to everything we do that I'm also in constant tension and anxiety and even mourning.  In the book, I describe it this way:


The book of Romans tells us that the Holy Spirit prays for us with groans that cannot be uttered.  That's really the best way I can describe what happens.  Sometimes the Spirit shows me things about Darrel that I really didn't understand.  Sometimes the Spirit shows me things about myself that I don't particularly like.  Sometimes we pray together or mourn together or rejoice together.  Sometimes we're just together.  It doesn't make sense, but once you've experienced it, it doesn't need to make sense.  It just needs to be.

What good is this book?  If it's such a challenging book, why did I agree to be a part of this project?  First of all, it was an opportunity to speak to a tribe that doesn't often choose to listen to thoughtful creationists.  That seemed like a worthy opportunity that I shouldn't take lightly.  Second, I do think there is truth in our experience and in the book.  In this modern polarized climate, where different tribes see no other option but to demonize and denigrate others, we Christians need to find and demonstrate a better way.  Because the direction the culture is going now is basically 1984, regardless of who's in charge.  When you decide that your ideological enemy is pure evil and must be stopped, tyranny and oppression are right around the corner.  We can do better.  We must do better.

In any event, The Fool and the Heretic will be out next month, and Core Academy has five (5!) copies to give away this week.  If you're brave enough to want to read this book, you can send me an email with the subject "I want to read F&H" to be entered into a drawing to win one of those free copies.  Since my audience is pretty small, you'll have a pretty good chance to win one.  I'll draw the names on Friday at 5 pm Eastern, and I'll contact the winners for their mailing addresses.

If you'd just like to buy one, check it out (it's available in paperback, ebook, and audio):

One more thing: If you don't want to read the book, don't worry about it.  You're not hurting my feelings.  It's a tough book.