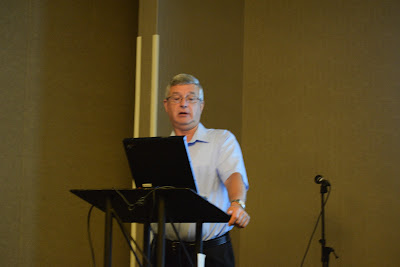 Wednesday was the last day of the conference, and I started out in Andrew Snelling's presentation on radiohalos (that's him in the photo).  If you haven't been following his work, Andrew has taken early work on radiohalos and modified it to fit modern Flood models.   And in case you have no idea what I'm talking about, radiohalos are microscopic stains found in mica that result from radioactive decay of certain elements.  That alone isn't surprising, but the existence of polonium radiohalos is very weird.  The different forms of polonium all have a very short half-life, so they decay extremely rapidly.  So how could enough polonium build up to leave a stain in the form of a radiohalo?  That's the question.

Early work suggested that it must have been a sign of the initial creation of the rock, but it quickly became apparent that that idea was probably wrong.  Polonium radiohalos occur in rocks that were very clearly formed during the Flood, and we can tell that because of the rocks found around the radiohalos.  If they polonium wasn't created in the rocks, where did it come from?  According to Andrew's research, rocks with evidence of hydrothermal water transport have many more halos than rocks without that evidence.  So the hot water transported the polonium minerals to produce the radiohalo.

At this conference, Andrew came up with an interesting application of this research.  It turns out metal ore veins are also deposited by hot water transport, so Andrew thought if he looked at rocks collected near known mines, he would find polonium radiohalos, which he did.  This suggests that finding radiohalos might signal the presence of metal ores, which is an extremely practical application of Andrew's creationist research.  Imagine that!

The next presentation I attended was Liu's paper on endogenous retroviruses.  I've blogged about Liu's work before (here and here), and this paper was a continuation of that work now looking at endogenous retrovirus transcriptional activity in response to alterations in their hormone-response elements.  If that doesn't make any sense to you, that's OK.  You can read my previous blog entries for the simpler version of the story.  Liu's current work was interesting work, and I'm really interested to see where it leads.

Finally, I stopped in to hear Neal Doran's presentation on dinosaur created kinds.  He's been doing a lot of work with his students at Bryan College trying to uncover evidence of created kinds in dinosaurs.  The good news is that he's got plenty of evidence of discontinuity within the dinosaurs, which is what I expected.  What I didn't expect to see is the small number of dinosaur groups that show a correlation between their shape and the order in which they occur in the fossil record.  If we found that in the Cenozoic, I'd say it was evidence of diversification, but within the Flood...  I'm not sure what to say.  Very peculiar, indeed.

The research wasn't nearly as peculiar as the Q&A, where someone opened their question talking about all the evolutionary terms in his talk, and then asked if Neal was a creationist.  He was a good sport about it, and he affirmed that he was indeed a creationist.  I was trying to figure out the "evolutionary terms" bit.  You mean "evolutionary" terms like baraminology, holobaramin, baraminic distances, discontinuity, and the like?  Yeah, that stuff sounds just like Jerry Coyne.  I'll have more to say about this at the end of my series.

Tomorrow, I'll be back to summarize the afternoon panel sessions.