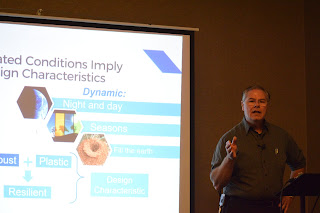 Day two at ICC began with a remote presentation from Paul Garner of Biblical Creation Trust, who was in the UK at the time.  Paul planned to come to ICC, but due to unexpected circumstances, he was unable to attend (he's OK now if you're wondering).  Thanks to the convenience of Skype and the ingenuity of the conference organizers, he gave a talk that was almost as good as having him there in person.  That was easily the best remote presentation I've ever experienced at the ICC.

Paul's subject was the Devonian tetrapodomorphs, which is a fancy word for fish that look like they have legs.  Or maybe giant salamanders that look like fish.  It's hard to tell with these guys.  This is yet another one of those big set of intermediates that we find in the fossil record.  Paul and I examined the connection between birds and dinosaurs at the 2013 ICC, and the unnecessarily notorious feathered dinosaur talk at this conference largely confirmed our results.  We also had a presentation at Origins on the "mammal-like reptiles," representing a third big set of intermediates from the fossil record.  So examining the tetrapodomorphs was a welcome addition to the growing creationist scrutiny of these intermediate forms.  Like all the other studies, Paul found evidence that there were multiple created kinds of these intermediate creatures, implying that they were probably not an evolution transition.  Excellent work.  I was very excited to see it.  The baraminology work I've invested so much time in is paying off handsomely.

Next, I attended one of the talks by my Core Academy colleague Roger Sanders and his collaborator Steve Austin.  They submitted a massive paper on the "floating forest" hypothesis that was split into two papers.  This paper covered the history of the idea, which was far richer than I expected.  What is this "floating forest?"  Evidently, there has been a long history of proposals that the coal beds of the Carboniferous were the remains of a gigantic floating bog, literally a forest floating on the surface of a very large body of water.  I knew Steve Austin had proposed something like this for his dissertation, and Kurt Wise had proposed a much bigger version of the same floating forest that encompassed most of the Paleozoic plants.  I was aware that the idea had come under some criticism for being recycled from old ideas first proposed by the scriptural geologists, a group of creationists back in the early 1800s who proposed their own young-earth version of geology.  What I did not realize is that the story was much, much bigger than that, with geologists repeatedly suggesting that the Carboniferous plants were especially suited to floating rather than growing in soil.  This was a fascinating and illuminating presentation.

Next, I checked out the presentation on "Continuous Environmental Tracking" from Randy Guliuzza of the Institute for Creation Research, which was a LOT of fun (that's him in the photo).  Randy's been coming to Origins conferences for seven years now, and I've watched him develop these ideas at successive conferences.  When he first started coming to Origins, I just thought he was trying to apply engineering principles to the way we think about organisms, which didn't strike me as all that exciting.  But he kept digging up these strange examples of rapid adaptation and - even stranger - predictable evolution.  Now he's found examples of both: rapid, predictable adaptation, and it's not just a few examples.  His ICC talk reviewed example after example of extremely rapid and very specific adaptation.  He suggests that populations track environmental changes, and that certain environmental changes can induce a population change in the next generation.  The key here is that he suggests that these population changes are internal responses to external conditions rather than natural selection winnowing out unsuitable characteristics.  These are designed changes!  I'm really looking forward to more research on this very question.  We need to figure out some direct tests and get this idea evaluated in actual field research!

The fourth and final talk I attended was Bill Worraker's presentation on the "heat problem."  The problem is pretty simple: If plate tectonics is accelerated during the Flood (which we think it is), then it would generate an enormous amount of heat, more than 30 times as much heat as you would need to boil off the oceans!  So that's a problem.  Bill (also representing Biblical Creation Trust) examined some basic models of heat flow to give us a sense of what kind of models might be the best for more advanced modeling studies.  I was hoping for something more definitive, but focusing on possible solutions is a good first step.

And that was day two.  Once again, you can read the full papers for free at these links: