Movie ponderings: The Riot and the Dance

Wow.  Last night, I went to see the new film The Riot and the Dance featuring biologist Gordon Wilson from New St. Andrews College.  Gordon was a professor of mine when I was an undergrad at Liberty.  He taught me to appreciate plants, which was a big deal because at the time I thought plants were boring.  Boy was I wrong.

Today, many years after my botany class, I saw Gordon on the big screen, and I'm struggling to express what I saw.  The movie was quintessential Gordon as he chased snakes and lizards and bugs and even a leech.  The movie was also so much bigger and so much deeper and so much more than I have experienced before.  This is Gordon's thought and ideas magnified and matured and frankly amazing.  This is biblical integration done well.  Finally.

Within Christian academia there's a big concept going around called the integration of faith and learning.  It's supposed to be about how we put our specialized studies together with our Christian faith.  That sounds like a big deal, and it should be.  Unfortunately, after reading far and wide in the "integration" literature, I've found a lot of integration to be what I call (dismissively) "sprinkling Bible verses."  Such efforts look like thoroughly secular summaries of disciplines with a few verses or Christian concepts tossed in at mildly appropriate places.  For example (purely theoretical), someone might explain the details of natural selection among the finches of Galapagos and then quote Matthew 10 where Christ says, "Are not two sparrows sold for a penny? And not one of them will fall to the ground apart from your Father."  See what I mean by "sprinkling Bible verses?"  It's not integration.  It's just shallow.

The Riot and the Dance emphatically avoids sprinkling Bible verses even though it is utterly saturated with biblical thought and reflection.  This is integration done well.  Very, very well.  The movie is a deep and profound meditation on the wonders of God's creation.  It challenges poor, lazy conceptions of our place in creation.  It is thrilling and wonderful and convicting.  The ideas in the movie are born from a lifetime of careful thought and prayer.  Every Christian student of science needs to see this movie.  It's the perfect opening to a course in biology or life science.  (The kids sitting next to me loved it.)


Here's an example: In Sri Lanka, Gordon encounters a good-sized colony of fruit bats.  There's great footage of the bats hanging out in a tree, flying around, and just being fruit bats.  As he views this, he talks about how some aspects of creation can creep us out.  We might even hate them.  Lizards, frogs, bats, bugs.  The creepy crawlies.

Then he turns that attitude on its head: Would you ever think about singling out part of the Bible and saying, "I really hate that part of God's Word"?  Sounds crazy doesn't it?  Well, why do we say that about parts of God's world?

Throughout the movie, Gordon teases us with thoughts on snakes, the critters that probably creep out the most Christians.  As he talks about garter snakes, threadsnakes, and sidewinders, he promises he'll talk about what they mean when he gets to the really dangerous ones.  He doesn't disappoint either.  In Sri Lanka, he encounters a hooded cobra, and he reminds us of Isaiah's vision of the coming Kingdom of God: "The nursing child shall play over the hole of the cobra, and the weaned child shall put his hand on the adder's den."  In the Resurrection, he says, when all creation is redeemed and released from its groaning, there will be cobras.  So even today, as we fear their bite and long for Christ's healing, we can look forward to a time when the cobras too will experience that same healing as they find new purpose in the Kingdom of God.

Maranatha, Lord Jesus.  I want to play with a cobra too.

If I had one complaint about the movie, it was the ending, where the entire format shifted to talking head interviews.  I found myself wanting to go back to creation and explore even more.  But that's a minor distraction, and my reaction of longing for God's creation was really the point of the movie, wasn't it?

I'm going to have to watch this again.  And again.  I'll need to take notes too.  This is great stuff.  I hope you got to see it, and if you didn't, I hope you'll catch it on home video. 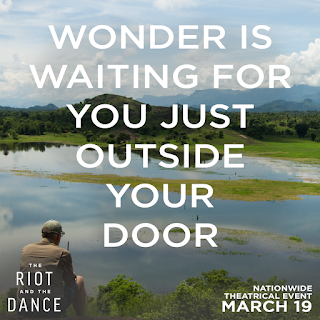