Another way the origins debate needs to change 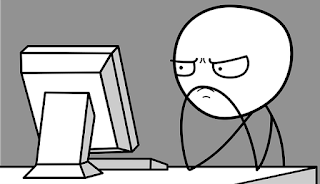 Ted Davis has an interesting blog post over at BioLogos.  I don't usually link to BioLogos (because, you know, we're mortal enemies and all), but this article struck me as something worth responding to.  Ted writes about two things that he would like to see change in the current origins debate.  The first is sacrificing truth to service agendas, and the second is educating rather than indoctrinating.  Your reaction to his essay will vary, of course, depending on what you think about creation, creationists, and BioLogos.  I for one am always disheartened to see BioLogos position themselves as the "reasonable" middle ground between extremists like me and Richard Dawkins.

Rather than complain about BioLogos though, let me instead offer my own habit that needs to change in the origins debate.  It's a habit that I confess that I've indulged in, even right here on this very blog.  It's also a habit that I've come to dislike more and more over the past few years as I've gotten to know Darrel Falk.  Let's call it "Diagnosing the Enemy."

Diagnosing the Enemy usually works like this: A person (let's call him Doug the Diagnoser) reads a book, article, social media post, or random comment on the internet with which he vigorously disagrees.  Instead of saying something like, "I vigorously disagree," Doug instead writes, "Here's your problem: ____."  As if Doug, merely by reading someone's writings, could accurately diagnose the enemy's "Real Problem."

I have encountered many diagnosers in my career.  My "Real Problem" ranges from refusing to grow up and give up my childish beliefs in creationism to scientific ignorance to believing bad theology to just being a garden-variety idiot.  Some diagnosers are blatant: "Your problem is...."  Other diagnosers can be more subtle: "I just wish you understood ..."

Diagnosing goes the other way too: Why do Christian biologists continue to believe, endorse, and promote theistic evolution?  They're looking for respect from their secular colleagues, AKA trying to please "the world."  They're ignorant of the science against evolution (sound familiar?).  They don't believe the Bible.  Grant money.

There's two big problems I see with Diagnosing the Enemy.  First of all, it's just a profoundly arrogant thing to do.  How can anyone seriously think that reading a Facebook comment or blog article would actually reveal all the intricacies and complexities of human thought?  Some days, I can barely put two words together, and you think that's going to actually reveal the inner workings of my mind and years of study and research and prayer and thought?

Also arrogant is the ulterior motive of Diagnosing the Enemy: I have the cure.  Because, let's face it, diagnosing a problem isn't really the point, right?  The point is: if only my enemy would watch my video or read my book or do what I tell them, then everything would be fine.  Because not only can I diagnose your problem by engaging in a superficial reading of superficial comments, I'm the guy who's gonna cure you!  When you think about it like that, it's obviously and embarrassingly silly, but it still doesn't stop us from reading certain triggers and sticking people in that pigeonhole.

Which brings me to the second big problem: It's dehumanizing.  Instead of complex people with complex thoughts and attitudes and personalities, we reduce our enemies to one simplistic issue.  There aren't just ideas out there that float around having battles by themselves.  Ideas are held by real people with real personalities, and histories, and values, and fears.  And all of that immensely complicated personality gets entangled with the way we think about the world and our faith.  When disagreements pop up, though, these people for whom Christ died suddenly become defined by one perceived "defect."

One of the biggest surprises of getting to know Darrel Falk is discovering how complicated he was.  He had heard my objections to evolution, and for some he even had decent answers.  These weren't just casual thoughts, mind you.  These were my zingers.  My huge objections.  They should have left any evolutionist speechless.  Yeah, I diagnosed my enemy, and he just smiled and explained some pretty sophisticated responses to my objections.  He'd given every one of those things a lot of thought.  I had de-humanized him to a single defect.

Darrel also wasn't as well-versed as I thought he should be, which was also humbling.  When he would talk to me about his problems with creationism, I would respond just like he did.  I would explain basic creationist thinking on a wide range of matters, and he seemed to be hearing many things for the first time.  This isn't intended to criticize Darrel at all.  Quite the contrary.  It was just a shocking thing to see two guys who are from all outward appearances experts in the creation/evolution debate, but neither of us really knew much about what the other one actually thought or believed.

So maybe the next time you see some outrageous statement on the internet or even in a book, take the time to think about the person doing the writing.  Before you go off questioning their competence or venting your outrage, maybe try asking questions first.  You never know what you might learn.