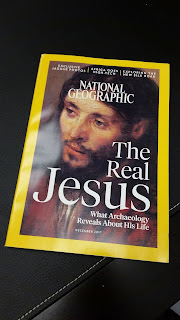 National Geographic has a cover story on "The Real Jesus" in the December 2017 issue.  It's written by Kristin Romey, and it accompanies a documentary describing the results of their study of the traditional tomb of Christ.

Honestly, I don't have a whole lot to say about it, but that never stopped a good blogger from giving some thoughts.  I enjoyed reading about the various archaeological discoveries that are well outside my expertise.  The article describes the excavations at Magdala in Galilee (the town from which Mary Magdalene gets her name) and the discovery of a first century boat on the shore of Galilee.  Interesting stuff.

The photography is, of course, fantastic.  I especially appreciated the picture on p. 65.  There the editors chose to depict the heel bone of Yehohanan, the only crucifixion victim known from archaeology.  The heel is still pierced with a Roman nail.  Yehohanan's remains were found in Jerusalem and date to the time of Christ.  I've known about Yehohanan's remains for years, but this photograph was a fitting but grim reminder  of Jesus' own death on the cross.

I also noticed that this is probably the "safest" National Geographic article I've read in a while. Romey seems to walk the line between the skeptics who imagine that we know nothing about the "real Jesus" and the faithful Christians who accept without reservation the water-walking, disease-healing, demon-banishing, Resurrected Christ as depicted in the gospels (Full disclosure: I'm one of the latter).  She doesn't go out of her way to play the skeptic, but she also doesn't fully endorse the Resurrection.


Scholars who study Jesus divide into two opposing camps separated by a very bright line: those who believe the wonder-working Jesus of the Gospels is the real Jesus, and those who think the real Jesus—the man who inspired the myth—hides below the surface of the Gospels and must be revealed by historical research and literary analysis.

You might think that that's pretty obvious, but look again.  She says that scholars who study Jesus divide into these two camps.  It's not fanatics vs. scholars.  It's scholar vs. scholar.  That's a bit more even-keeled than more typical portrayals of Christians as zealots.

So there you go.  You could read worse articles on Jesus.  Check it out if you're interested.