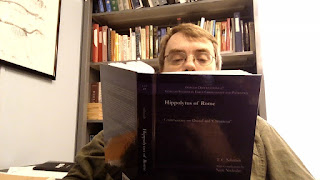 Apparently, people are too busy trying to score points against their debate opponents to bother actually representing the fathers correctly.  A new English translation of two works by Hippolytus of Rome gives us an opportunity to review a very early Christian perspective on the age of creation.  Does Hippolytus believe in the symbolism of "a thousand years is as a day" or does he count up the years of the Genesis genealogies like creationists today?

I preface this discussion by acknowledging that little is known about Hippolytus and not all scholars agree that he wrote both the works included in this new translation.  The two works from T.C. Schmidt's Hippolytus of Rome are the Commentary on Daniel and the Chronicon.  I will proceed here assuming they are by the same person, but I acknowledge that they may not be.  Even if they aren't from the same author, they are definitely contemporary opinions from the early third century (approximately A.D. 220-235).  Hippolytus is believed to have been a bishop in Rome.

The Commentary on Daniel includes a section chastising Christians for trying to predict the end times, and then in a baffling move, Hippolytus describes his own prediction:


But, so that in this we may not leave the matter at hand unexplained for the sake of the man who is inquisitive, we, being compelled to speak what is not possible, speak by force. (4.23.1)

He then assures us that Jesus was born in the 5,500th year from Adam (4.23.3). He continues, "...it is absolutely necessary for six thousand years to be fulfilled, so that the Sabbath rest may come" (4.23.4), and he quotes Ps. 90:4, "For a day of the Lord is as a thousand years."  He then draws a few other really peculiar symbolic parallels. In the first, he quotes Rev. 17:10, "... there are seven kings: five are fallen, and one is, and the other is not yet come."  That's usually taken to refer to actual rulers, but Hippolytus concludes that they are ages.  "Five are fallen" refers to the past. "One is" refers to the present, which he believes is perfectly divided into five hundred year portions by the birth of Christ. The one yet to come is the millennial kingdom, the Sabbath rest.

If that isn't odd enough for you, his next symbolic interpretation is really weird.  Hippolytus takes the cubit measurements of the Ark of the Covenant and adds them up.  Why?  "The measure of which added together makes five and a half cubits, so that the five thousand five hundred years may be demonstrated."  Based on all this, Hippolytus concludes that there must be 500 years left between Jesus' first advent and his second, meaning that the end times are still far off (for him).

So score one for those who claim that the church fathers believed the creation was young because of symbolic interpretations.  You can't get much more symbolic than Hippolytus' extremely imaginary reading of Scripture.

The Chronicon presents a similar conclusion based on completely different reasoning. It begins with the genealogies from Genesis 5 and 11, based on the Septuagint ages, and concludes, "Up until this point [the tower of Babel], there were five generations and 525 years and from Adam 15 generations and 2,767 years" (Chronicon 42). After a long portion describing nations and geography, the author returns to his chronology, adding up even more years from the Bible.  He concludes there were 3,383 years between Adam and Abraham (621), 3,884 years between Adam and the death of Joshua (632), and 4,364 years between Adam and David becoming king.  All of these dates were deduced from adding up dates listed in scripture.  Continuing his calculations through the Davidic dynasty in Judah, he concludes that the destruction of Jerusalem took place 4,842 years and nine months after the creation of Adam.  From Adam to the birth of Jesus is 5,502 years.

So score one for those who claim that the church fathers engaged in biblical chronology just like modern creationists, by adding up the ages of the patriarchs listed in the Bible.

That's not to say that Hippolytus is good at what he's doing.  In his introduction to the translation, Schmidt notes several chronological discrepancies in the Chronicon, some of which could be examples rounding but others are unquestionably self-contradictory.

But the quality of Hippolytus' work isn't really relevant to my purpose.  I began this essay noting that the church fathers are used (abused?) to serve modern ideological purposes to which they may be poorly suited.  I have emphasized again and again that the church fathers hold more than one interpretation of the same passage at the same time.  They accept historical and symbolic readings.  Hippolytus (or the authors of these two works) is a great example of that.  In Chronicon, the author treats the Bible as a historical chronicle, from which he can take dates and timespans and infer the date of creation.  In the Commentary on Daniel, the author treats the Bible as a symbolic book that must be deciphered to be understood.  Even if that isn't the same author, this differing treatment of scripture shows us that we can't just quotemine the church fathers to serve whatever agenda we have.  Their views are far more complex than the either/or "symbolic OR historical" approach of modern evangelicals.

So, the next time someone tells you that the church fathers are entirely on their side, be sure to ask, "What do you mean by that?" 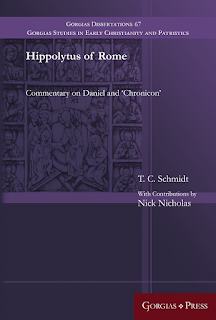